Some days ago a poem by Kabir, called Trap, was posted here, and if one reads it carefully, one may discover that the poem itself is a sort of trap. It begins with a confrontation:
Brother, why do you strut about,
so full of yourself?
Given such an opening, the reader will tend to identify either with the observing voice of the poet, or the hapless ‘brother,’ so full of himself. If we choose to identify with the poet’s voice, which is more likely from a literary point of view, we may, for a few lines, feel smug and self-satisfied that we are not as deluded as the ‘brother’ to whom Kabir is speaking. 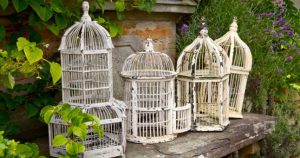 In the following verses Kabir speaks bluntly about the limitations of our physical existence: the humble beginning, head down and helpless in the womb, and the inevitable end when the body dies, destined either to be burnt to ashes or to be devoured by ‘armies of worms.’   Nor will our friends and relations be of much help at the end; some may go even as far as the cremation ground, but after that the swan of the spirit must fly on alone. The body’s greatest claim to fame, says Kabir, is that it is:
…a jar of unbaked clay
containing water.
Such a jar might indeed be remarkable, but no-one, least of all a potter, would expect it to survive for long, and that is precisely Kabir’s point.

At the conclusion of the poem, we find the message for which Kabir has been preparing us:
those who fall into
the well of death
ensnare themselves
in make-believe Maya
And we who have been siding with the poet in his exhortation to the ‘brother’ can nod in agreement and repeat the lesson to ourselves: “Yes, right.  Don’t fall into the well of death!”

But the trap of the poem is this: how does one avoid that well?  We are warned not to be
like parrots who delude themselves
and fall into a bird-catcher’s trap.
But who is the bird-catcher? What is the trap? What is the delusion of the parrot?

Look carefully into the matter.  Until we can answer that fully, we have not yet graduated from the school of the weaver.

One Reply to “About the Trap”