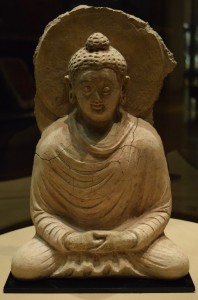 During the precious years Hazrat Inayat Khan spent in the physical presence of his Murshid Sayed Abu Hashim Madani, the young man once asked his teacher, “How may one recognise a godly soul?” “It is not by learning,” the Murshid replied, “for one may study many books without being spiritual.  Nor is it by piety; one may scrupulously observe outer forms without understanding the reality they represent.  Nor is it even by miracles, for one may acquire powers without yet having discovered the Truth. The only reliable way to discern a truly godly soul,” the Murshid concluded, “is by the atmosphere.  But not all are capable of sensing that.”

This presents an interesting question to the seeker on the spiritual path.  What is atmosphere? Where does it come from, and how may it be perceived?

Hazrat Inayat Khan frequently spoke of this subject; there are references to atmosphere in many of his lectures, and in the Gathekas.  Really speaking, he uses the term to refer not to an invisible substance or  capacity, but to the effect the unseen space acquires from whatever impression that strikes it.  He speaks, for example, of the atmosphere of places, and in a very gentle way laments the fate of any one (like himself) who must move from one hotel room to another, unable to establish their own atmosphere.  Strong events can leave an atmosphere that resonates for many years; some places, the sites of great suffering, have a very dark and painful atmosphere, and others, exactly the opposite.  There is a tradition that the black stone of the Kaaba was first set in place by the prophet Abraham as he returned, exalted, from his sojourn in the mystery schools of ancient Egypt.  It became a place of pilgrimage not because it was an unusual stone, but because it rang like a bell through the centuries with the power and light it received from Abraham’s illuminated soul.

This explains why there are such ceremonies as the House Blessing form of the Universal Worship, frequently performed when a family moves to a new home.  Through the beauty of candles, flowers  and incense, by the power of prayer and with a focus on Divine Light, a holy atmosphere is created which helps wipe away any traces of what may have passed before in that place.

Of course, it s not only places and things that carry an atmosphere, but most especially, people. Our atmosphere is created not by our actions, but by our thoughts.  As Murshid Madani pointed out, one may steadfastly offer prayers, but if one’s mind is wandering amidst mundane matters while one prays, the atmosphere will not be heavenly. Conversely, if one’s thoughts consistently drift upward towards one’s ideal, however earth-bound the activity, the atmosphere will certainly reflect that.

With this in mind, the spiritual seeker might wish to give attention to the discernment of atmosphere.  This means looking beyond the surface, to the depth of every circumstance and of every encounter with another, asking oneself what is being communicated in the silence. One very quickly notices that not only the character but also the intensity of atmosphere varies distinctly from person to person. What is more, the atmosphere of a person cannot be disguised; a sour person may adopt polished manners but the atmosphere will never be made sweet by them.

And if we embark on such an examination, we should also be honest enough to look closely at ourselves.  What atmosphere do we emit?  It is hard work to observe our own thoughts in a detached way, and it also requires a rigorous sense of justice, but it is an essential exercise for the student.  Not only does it help us to manage our character, but it also teaches us to look with much more compassion on the so-called faults of others.

One Reply to “Atmosphere”