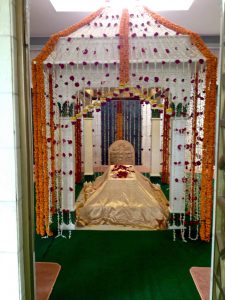 To go to a tomb or a shrine is to be comforted according to the force of our desire and our responsiveness.  That the body is resting there has its own significance, and is more than a feeling. But to live for his message is to live with him. In his message, he is living. To live for that keeps one near him. The shrine brings one to the consciousness of the inner being, and devotion to a shrine kindles the inner light. There is such a happy optimism in this experience; hope awakens, strength is aroused and sends one out renewed.
— “Visit to the Tomb of Inayat Khan”
Pages in the Life of a Sufi
Musharaff Moulamia Khan

In order to register for the November retreat, it will be necessary to pay in advance by mid-August.  This is a change from the usual practice of paying on arrival. Details about registration fee, and payment deadline and method will be coming shortly.

Regarding the Spanish language retreat, participants may wish to come a few days early and celebrate the Urs of Hazrat Inayat Khan.  It is too early to know the program, but it is likely that it will be held over the weekend of February 3-5.

Because of the construction of new accommodation facilities at the Dargah, it will be possible to have larger groups for our retreats.  Depending on willingness to share, we will perhaps be able to manage 18 or 20 participants, all staying in the Dargah compound itself.

Details about the retreats, including theme and registration details will be available soon.  For those who have not participated in a Dargah retreat, inquiries are welcome at nawabpasnak@gmail.com

One Reply to “Changing Retreat Plans”