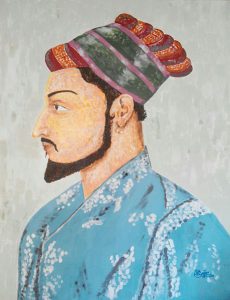 Dara Shikoh (1615-1659 CE) was the eldest son and heir apparent of the Mughal Emperor Shah Jehan, remembered as the builder of the exquisite Taj Mahal as a tomb for Dara Shikoh’s mother Mumtaz Mahal.  Deeply interested in the spiritual side of life, Dara Shikoh was a follower of the Sufi Sarmad and studied with the Sufi saint Hazrat Mian Mir. He also developed a friendship with the seventh Sikh Guru, Har Rai. Looking for common ground between the mysticism of Hinduism and Islam, Dara Shikoh translated fifty Upanishads from Sanskrit into Persian, making them available for Muslim scholars.  Although  favoured by his father to succeed him to the throne, Dara Shikoh was forced to fight a series of battles across much of northern India with his younger brother Aurangzeb.  In the end, Dara Shikoh was defeated, paraded in chains and murdered as a danger to public peace and an apostate.  Two years after his death, Aurangzeb also ordered the death of Sarmad, and some years later, the execution of the ninth Sikh Guru Tegh Bahadur.  On the strength of the two poems here, the history of India might have been quite different if Dara Shikoh had not been defeated.

Every Name That Exists

No atom exists
that is apart
from the Sun.

Every raindrop is from
the same ancient sea.

Has no one a name
for this ultimate Truth?

Every name that exists
is already owned
by that Truth.

If you’re serious
about joining
the people of vision
you must move from speech
to the inner state.

You won’t become one
just by chanting “Unity”—