The question often arises, ‘What is the origin of Sufism?’ but it is difficult to give a satisfactory answer.  If we understand ‘Sufism’ to mean a search for Truth, then we can only say, ‘it began with the origin of consciousness,’ a moment outside the frame of history.  If, on the other hand, we seek to know the origin of a particular, recognisable tradition, we begin to encounter conflicting assertions.  Many Muslims state that Sufism began with the message of the Prophet Mohammad, and that the Sufi path only exists within the religion of Islam.  Other Muslims tell a different story; Hazrat Inayat Khan did not require mureeds, nor even his own children, to accept Islam, and the late Khwaja Hasan Sani Nizami, whose family home stands between the Dargah of Hazrat Inayat Khan and that of Hazrat Nizamuddin Aulia in New Delhi, often said that Sufis existed long before the time of the Prophet. Also, there is a tradition that the first Sufi was Adam (regarded by Muslims not as the first sinner but as a Prophet), meaning that Sufism is as old as humanity itself.

Although Sufism has been enriched through the ages in many ways–by the poetic flowering of ancient Persia, for example–Hazrat Inayat traced Sufi connections back to ancient Egypt, where the wandering prophet Abraham went to learn.  On his return from Egypt, filled with illumination, Abraham set in place the black stone now called the Kaaba, as a monument to what he had experienced.  Since he himself is regarded as the foundation stone of three great religions, we could ask, then, what did Abraham find in Egypt, and how does it relate to the path we are following?

The history of ancient Egypt covers thousands of years, and the esoteric tradition is rich, complex–and frequently misunderstood.  Some modern believers in monotheistic religions look at the abundance of gods and goddesses, most with animal features such as the head of a bird or the body a lion or the legs of a hippopotamus,  and dismiss the ancients as hopeless, unenlightened pagans.  Others, perhaps feeling personally incomplete in some way, think that anything ‘Egyptian’ might provide what they miss; to wear a bead from a tomb (but whose tomb?) might supply the magnetism one lacks, or to sit inside a pyramid structure might give some special meditative experience one is otherwise incapable of obtaining.  If one looks at the tradition with ‘Sufi’ eyes, though, one begins to find something else. 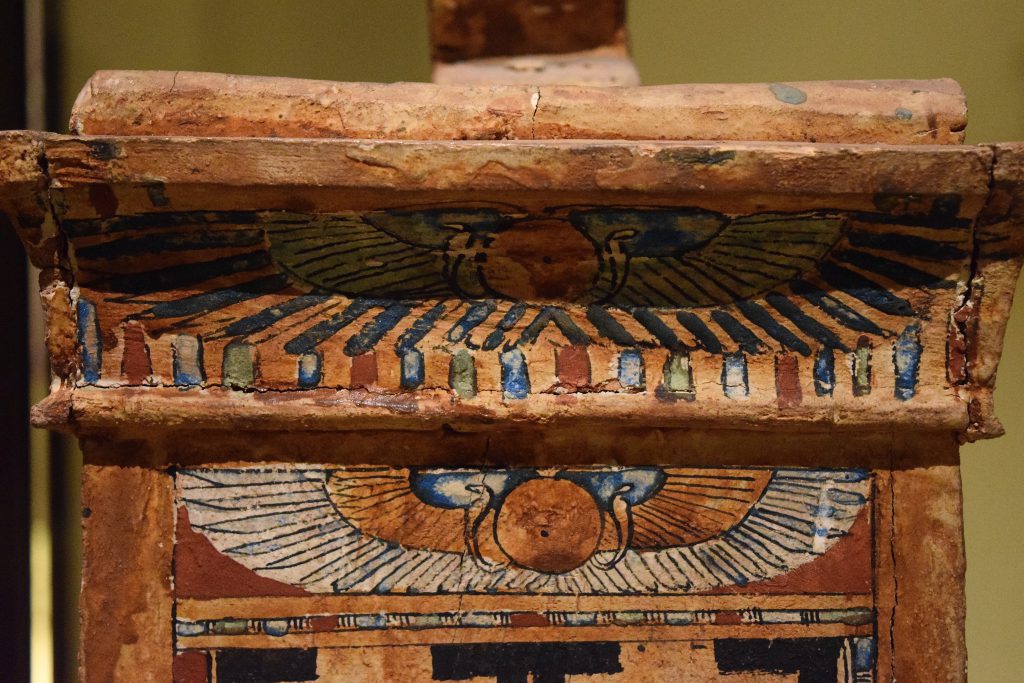 Perhaps the first point of connection we might find is the constant use of the winged disk image, shown here above the ‘false door’ of a tomb.  To the ancients, the wings of the image represented the sky, and the disk represented the powerful, life-sustaining sun.  The two snakes on either side were supposed to guard the two journeys of the sun, the visible one from sunrise to sunset, and the unseen journey through the underworld by which the sun returned to the point of sunrise.  The Egyptians placed this symbol over doorways, as a sign of protection; we can recognise that to think of the divine as one passes from one place to another is not very different from the Muslim custom of invoking the Merciful and the Compassionate whenever one begins something.  This symbol is of course very similar to the flying heart, especially since the heart can be regarded as a person’s ‘inner sun’ or solar centre.  The snakes can be seen as a reference to the currents of the breath, the out-going, bright Jelal, and the inward turning, receptive Jemal, and by their proper care these two phases of our life remain in order. 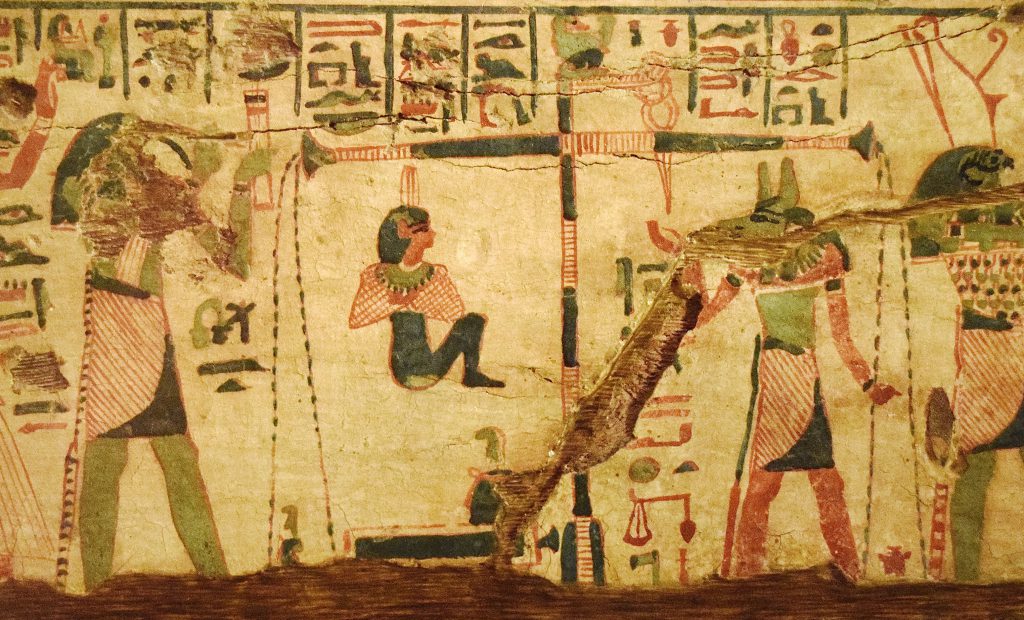 The weighing of the heart. The Goddss of Truth hovers over the left side of the scale, and the heart rests on the right side.

The Egyptians distinguished different aspects of the human being, but they felt that the heart was the most important aspect of consciousness, a belief which was expressed in the supposed ‘weighing of the heart.’  The entire Egyptian culture could be said to focus on the after-life, inasmuch as great emphasis was laid on burial customs and rituals, all with the intention of preserving life beyond the grave.  Within this belief structure was the certainty that after death, one would have to face a tribunal of divinities and be judged for one’s actions in this life.  In the trial, the heart of the deceased was placed on one side of a scale, while on the other side was placed a feather, symbol of Maat, the goddess of truth.  The deceased would then make a ‘negative confession’ before the tribunal, a series of forty two statements such as: I have not stolen; I have not slain men or women; I have not told lies; I have not polluted myself; I have terrorised none; and so on.  If the confessions were true and the heart was light, the deceased was welcomed into the after-life, but if the heart was heavier, and descended below the truth in the scale, it was immediately eaten by a terrible monster, and the person was, so to speak, erased, ceasing completely to exist.  No doubt, for the average Egyptian this judgement and confession was not something that they thought about very much, since there were priests and prayers and spells in place to manage the affair, but it nevertheless teaches something important to those who wish to learn it: all that we do has a consequence, and there is nothing more precious than a heart free from guilt and self-reproach.

As it says in the Gayan:
It is preferable to all wealth we earn in life,
and all friends we have attracted through life,
if our conscience says at the moment
when we are passing from earth,
“Thou art true.”

3 Replies to “From Ancient Egypt”