During his last months in India, (ninety years ago in 1926) Hazrat Inayat Khan lived in Delhi in a bungalow called Tilak Lodge, near the west bank of the  Jumna River and north of the Kashmiri Gate.  Although completely built up now, in those days the area was quite wild.  Some ten kilometers south on the same side of the river lies the tomb of the Mughal Emperor Humayaun, then crumbling with neglect and now aggressively restored.  To the west of the tomb is the Basti Hazrat Nizamuddin, where the Dargah of Hazrat Nizamuddin Auliya is situated.

The tomb of Emperor Humayun is a few minutes distant from the Dargah Hazrat Nizamuddin Auliya.  The memorial is situated on an enormous marble platform one reaches after climbing many steps.  It dominates a wide region.

Murshid arrived there at sunset while streams of gold were pouring out over the country, enhancing the glory of the huge building.

Murshid said, “It is like a throne on the earth.” 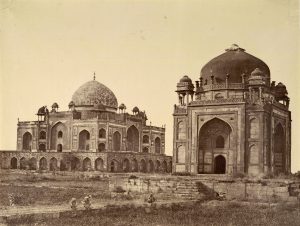 From the platform of Human’s memorial tomb, one sees next to the building a white dome and a verdigris one vaulting over the shrines of the Emperor’s barber and of his jeweller.

Murshid said, “The service of the King made them great.”

Murshid regularly made a walk at the time of the setting sun; sometimes along the footpath on the bank of the Jumna, or along the Bela Road till far beyond Metcalfe House; once to the little Shiva temple where the stone steps lead down to the Jumna, where the Hindus bathe and worship; sometimes to the Qudsia Gardens along the road with the old banyan trees, to the mosque covered with ivy, in which a little light burned every night.  Murshid always entered by the path at the side, and remained for some time on the open square before the old building.  Once Murshid said, “If I left the world, and went to sit here in silence, thousands would come and be my followers.”

Then came the time of the dark moon in the month of December. Every evening Murshid went along the Bela Road and followed the sandy path that begins near  the mosque* with the Sufi’s tomb. Then Murshid went through the heavy sand to the Jumna.  Darkness comes soon after sunset in India. That is why one could nearly not see the river; one could only hear the soft rippling of its waters. Long times Murshid stood before the black stream.  On the other side thousands of jackals were howling in the wilderness.  Then Murshid went home in silence.

Murshid said, “I shall soon know what it means.”

*Possibly the Shahi Masjid, in the south-east corner of Qudsia Bagh.