The life of Hazrat Inayat Khan underwent remarkable transformations in the princely state of Hyderabad, principally because of two men whom he met there.  One, of course, was the great and saintly soul destined to be his spiritual guide, Sayyad Abu Hashim Madani.  The other was His Highness Mir Mahebood Ali Khan, the Nizam or ruler of Hyderabad. 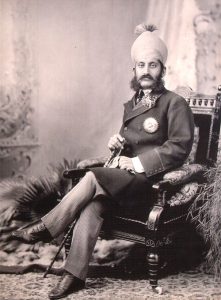 The Nizam was a complex figure; amongst the royal courts of India at the time, his was the most wealthy and illustrious, and it was partly that splendour and cultural refinement that drew young Inayat there, seeking sophisticated listeners for his music.  In his personal style, the Nizam was said to be extremely luxurious, with a wing of his palace full of a vast wardrobe, and he reportedly did not wear anything twice.  Nevertheless, there was another side to him that not everyone recognised.  When there were floods, he opened his palaces to house the homeless, and he paid off serious debts of his nobles.  He also had a mystical nature, and had developed the ability to cure snake-bite; he gave orders that if anyone was bitten, he was to be called, even if he were asleep, and in time his power increased to the point that it was sufficient for him to speak to the sufferer over the telephone.  And when Inayat succeeded in meeting the Nizam (helped along by the blessing of a dervish) and was invited to play and sing privately for him, the Nizam received him dressed very simply, sitting on the carpet, as a way of conferring honour on Inayat and his art.

The following brief anecdote, in the words of Hazrat Inayat, gives a further glimpse into the nature and character of the Nizam.

Once the Nizam of Hyderabad was walking in the country, and a knight happened to see a thorn stuck in his shoe.  He rushed before the attendant had seen it, and took out that thorn from the king’s shoe.

The king looked back and said,”Were there no attendants present?  It was for them, not for you. And since you have taken this work, you can no longer continue to be my knight.  Please retire.”