This anecdote was recounted by Kismet Stam, one of the secretaries of Hazrat Inayat Khan (and who traveled with him to India and was present at his passing), and appears to be based on Hazrat Inayat’s own telling of the events.

Murshid once told a story about his boys: that during the time of the summer school Murshid one day found Bhaijan [his elder son, Vilayat] in a very thoughtful attitude in the garden of Fazal Manzil. Murshid asked him about what he was planning, and the answer was: ‘I want to give a lecture.’ ‘At the dinner table,’ Murshid suggested. ‘No,’ was the reply, ‘in the hall, before all the mureeds. ‘You  arrange it,’ Murshid said, smiling. 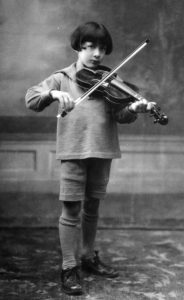 Some moments afterwards a mureed happened to pass where Bhaijan was standing. She felt inclined to ask about what he was thinking so deeply. ‘About a lecture I want to give before the mureeds,’ he said. So she arranged it for him, and in the corner-house several mureeds came together to listen. First he kept a long silence and the he spoke on the subject of ‘love and patience.’ He was nine years old then. He spoke with great enthusiasm; and he gave as an example for what he had to say an instance from the play ‘The Bogeyman’ which had just been given some days before. ‘Look at the lover,’ he said; ‘there he takes a poison and kills himself, whereas if he had had the patience to pursue the one he loved, how different life would have become for him.’ And so he continued.

After some days Bhaiyajan [Murshid’s younger son, Hidayat] also expressed the wish to give a lecture. He saw his elder brother having such a success, and he had perhaps just caught the sense of the word ‘inspiration.’  So he also wanted to experience it.

Everything was arranged for him. Many mureeds came together and were seated in rows before the speaker’s chair. He solemnly took his place in front of them, seriously uttered, ‘Silence,’ and closed his eyes. After some five minutes, here and there a curious mureed ventured a stealthy glance to see whether something was happening. But nothing happened. Bhaiyajan was there, his eyes tight closed. When a considerable time had passed some inquisitive mureed asked, ‘Bhaiyajan?’ Bhaiyajan slowly opened his eyes. ‘Your lecture, Bhaiyajan,’ the mureed said.

The answer was, ‘It has not yet come.’