The following is taken from “Pages in the Life of a Sufi” by Musharaff Moulamia Khan, youngest brother of Hazrat Inayat Khan, and gives some of his memories of a time when he lived with Inayat in Calcutta, the culturally diverse and vigorous capital of West Bengal.  Musharaff was then about fourteen years old. 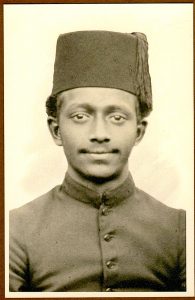 Inayat Khan was twenty seven when I joined him at Calcutta.  He had left Hyderabad a few months before, where he had been under the guidance of his Murshid for about three years.

Those days when I lived with him in Calcutta were a busy and successful time for him. He made many journeys, first to Murshidabad, and from there he was called to Dacca by the Prince of Dacca, and also to Silhet in Bengal by the ruler of that part, who offered him a home and full facilities to travel about India if he would make his home there. But he was reluctant to bind himself anywhere, and he always returned to Calcutta and to his classes. And when he came back he was always full of pleasant stories of his adventures, and of his amusing and happy experiences with people of all kinds whom he had met on his various visits.

At Dacca he was invited by the Prince to live in the palace. I tell this one story of that time to show something of his nature. He declined the invitation with many thanks, and then, as he afterward told me, he was very amused to find that his refusal had offended his accompanist, the tabla-player. “But I am a dervish,” said Inayat Khan, trying to appease the offended tabla-player; “think how much better it is to be free and independent, and under obligation to no one.”

“If you are a dervish then go to the Himalayas and live there, but if you live in this world you must accept the favours of princes, that is only common sense,” said the tabla-player.

When a second invitation came from the Prince, the tabla-player did not wait for my brother’s answer, but he began at once to pack his instruments and his possessions into the carriage that had been sent for them, determined that this time there should be no refusal of the gracious invitation. “Now you see how many points of view there are,” said Inayat Khan as he told the story. “That luxury-lover and comfort-seeker liked going to the palace more than anything else.”

In Calcutta Inayat Khan used to have all kinds of people in his classes. I remember two madzubs* used to come.  One of them was a very strange person, who used to wear a European hat wth his own Moslim clothes. He used very often to announce himself at midnight, when my brother was away, and I used to get up to welcome him.  There was no sleep for me on such a night, and early in the morning my guest would call to the man selling breakfast-cakes in the street, and would buy from him. And then he would offer some to me to eat, and I did hesitate to accept them, but I could not refuse; and then he would kiss me, and go away.  Perhaps we would not see him for days, and then suddenly he would come to another music class or perhaps he would present himself again at midnight. He was a poor, illiterate man, but a mystic, and I had been taught by my father to be hospitable and forbearing and of service to such people, no matter what might be their manner or ways.

The other madzub also one day came, when my brother was travelling; he came with many of his followers to our house, having a discussion on the Sufi philosophy and on the inner cult. I had the great opportunity of sitting next to this great master. I was feeling most happy and uplifted by listening to the wise conversation. The master became very thirsty, for it was the summer season. In India in these hot days people long for water more than food, and it is believed in the Orient that to offer water is a great and virtuous act one can do towards God.  I did not know what made me feel so, but I suddenly felt that the master was very thirsty, as if I had received an inner command for me to do something to quench his thirst.  That was my feeling. Being a child I did not know about intuition, but I followed my inner feelings, and what I did was that I took leave from all of them in that room and went downstairs to the shop where I could get lemonade and soda with a glass. I went upstairs again and I prepared a drink for this master and quickly gave it to him. He took it and he drank it with great satisfaction and he said to the people, “Do you know who is this young child?” They said they did not know, and then the master answered, “He is the youngest brother of Inayat Khan.” It gave them great joy. When they had all left, the master sad to me, “What a wonderful thing you have done, how did you know I was so thirsty?”

I answered, “Was it not your own command I had to carry out?” He looked at me with great love, and putting his hands on my head, blessed me saying, “My child, herewith I bless you.” This made a great link between the master and my humble self, and that deep impression lasted all my life. At that moment he awakened something in me whose value I am only now beginning to understand.

I remember when we were in Calcutta together, Inayat Khan used to sleep on a tiger skin on the floor, and seeng him lying there I used to feel that I could not sleep on my comfortable couch, and so I used to lie down on a strip of carpet beside him. He took but little sleep and would spend long hours in the night in prayer and meditation, and I used to try to keep awake and watch him. And I used to think his face changed and became etherealised as he became absorbed in his devotions. But when he noticed that I watched him, then he began to alter the time of the prayer, getting up sometimes a little later or a little earlier in the night.

I used to notice how after the death of his Murshid, he would often sigh deeply and call to his Murshid softly.  He had always been filled with a desire to travel, and after he lost his Murshid the desire grew stronger, and became his ambition. For his Murshid had enjoined him, as his mission, that he should make Sufism known to the western world to the best of his ability, and he was continually occupied with this project.

*A person so absorbed in contemplation of the Divine that ‘ordinary’ life ceases to have much meaning or interest, and often appearing to be mad.