The Mystical Madonna of the Stairs by Michelangelo Buonarroti

During the Christmas holidays Nawab and I had the blessed opportunity to see an abundance of divinely inspired art in Florence. One particular thread we followed was the works by Michelangelo Buonarroti (1474 – 1564), the great sculptor and painter who lived and worked in Florence for a significant portion of his life, and where his house is still preserved. 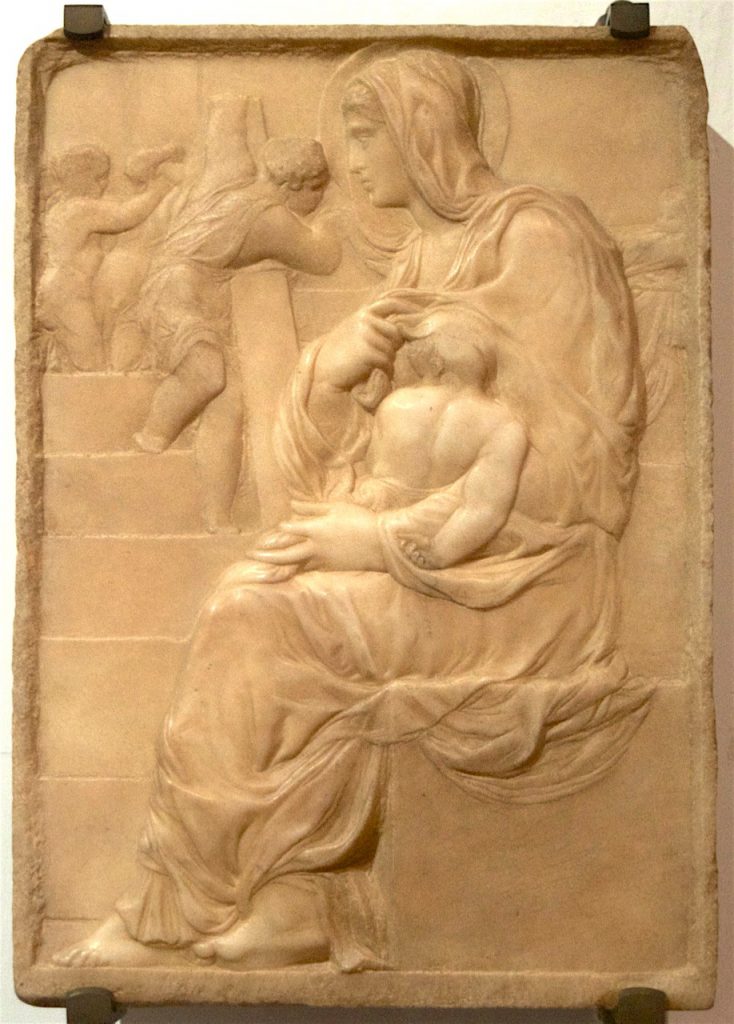 Unlike many artists of the high Renaissance period, who were starting to incline toward more rational, secular ideals, the works of Michelangelo used the power and beauty of the human body, inspired by the best examples of classical art, to portray the battle of the human spirit in search of the Divine light. His works can be seen in many museums and churches in Florence, but one museum that is often overlooked is his own home, which remained in the possession of the Buonarroti family until the middle of the 19th century. There, a work that particularly captured our attention was a low relief in warm yellow marble of the Madonna and Child, executed when Michelangelo was only 16 years old. 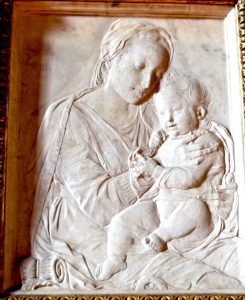 The presentation of the Madonna seated in profile, holding the holy Child with his back to the viewer, departs sharply from the convention. An example of the most usual portrayal of the Virgin and Child at the time can be seen in the so-called “Panciatichi Madonna” from 1460, by Desiderio da Settignano. Here, the Madonna sits on a throne, holding her beloved child with great tenderness and looking at him adoringly, while the Saviour directly faces the viewer. The marble relief conveys feelings of motherly love, and the flowing lines of the drapery and the outlines of the figures show grace and beauty. Thus, the worshipper who directs his prayer to this Virgin would be carried on the stream of her love to the Christ, who brings the worshiper salvation.

In the Madonna of the Stairs, neither the Mother nor the Child seems to claim the worshiper´s attention. She is seated in the pose of a Roman matron, breast-feeding her child, her gaze into middle space rather more inward, this inwardness emphasised by her crossed feet; she is not looking at her precious baby nor toward the viewer. So how should we read this image and where would the prayer of the devotee be addressed? 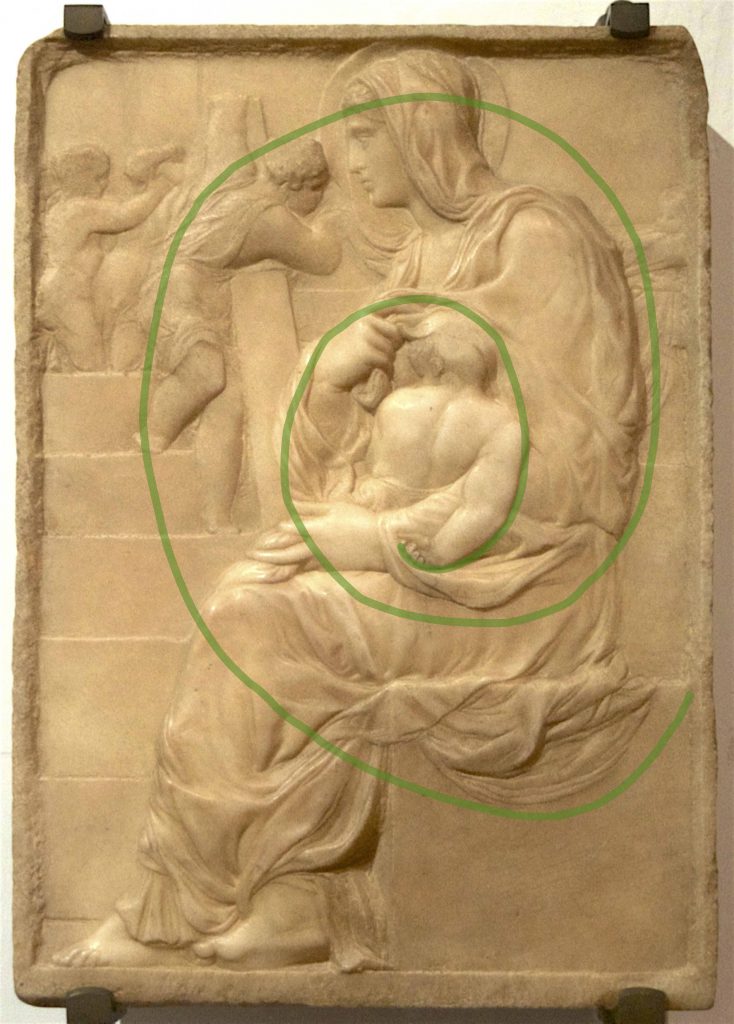 The mystical spiral of Michelangelo’s composition.

The actual center of composition is the arm of the baby softly twisted behind his back, and resting against his mother´s arm. His little cupped hand is the reservoir of energy from whence the powerful spiral of the composition seems to unwind; it turns around his body, then across her breast, around her hands, knee and back and, through her glance, projects this energy onto the staircase. Her crossed feet rest at the base of the stairs that lead upwards, where happy putti are stretching a cloth or a veil across the background.

Looking at this composition in a mystical sense, one could perhaps interpret this image to say that here the Virgin is the provider of our spiritual food; she receives our prayers and directs them upwards; she is not the final destination of our supplication, but she is the threshold of the door, a threshold which we have to literally step over in order to ascend. When we rise up the stairway to those higher regions, there are still other beings and veils that need to be removed in order to go even further, where perhaps the face of the beloved Son of God could at last be contemplated.

4 Replies to “Guest Room: The Mystical Madonna of the Stairs”