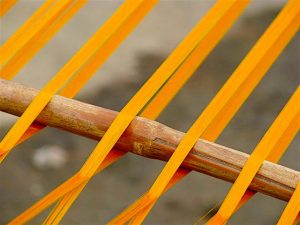 Kabir (1398-1448), the Indian mystic, poet, weaver and philosopher, here succinctly sums up the elusive nature of spiritual truth: what can be seen is not real, the real cannot be seen–and yet a person with knowledge can make use of words and signs to communicate something of what is known, to the confusion of the ignorant.  If we say that God has a form, we miss the mark, but if we say that God has no form, we also go astray.  The way out of the paradoxical puzzle, says Kabir, is in comprehending both love and renunciation, which might make readers think of Hazrat Inayat Khan’s mention of renunciation in this post.

What can’t be seen can’t be known–
what hasn’t been said can’t be believed.

The man who knows uses words and signs–
an ignoramus gapes in astonishment.

Some concentrate on a god without a form–
some on a god who has an outward shape.

The man of knowledge understands–
The Creator’s different from both of these.

Kabir says, the man who comprehends
both love and renunciation–

he doesn’t read the text of death,
the text of the world’s extermination.