Brahma-jnana [knowledge of the absolute, non-dual Self] is not a Knowledge to be acquired, so that acquiring it one may obtain happiness. It is one’s ignorant outlook that one should give up.  The Self you seek to know is verily 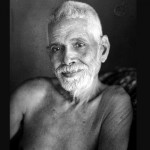 yourself.  Your supposed ignorance causes you needless grief like that of the ten foolish men who grieved the ‘loss’ of the tenth man who was never lost.

The ten foolish men in the parable forded a stream and on reaching the other shore wanted to make sure that all of them had in fact safely crossed the stream. One of the ten began to count, but while counting others left himself out. “I see only nine; sure enough, we have lost one. Who can it be?” he said. “Did you count correctly?” asked another, and did the counting himself. But he too counted only nine.  One after the other each of the ten counted only nine. “We are only nine,” they all agreed, “but who is the missing one?” they asked themselves. Every effort they made to discover the ‘missing’ individual failed. “Whoever he be that is drowned,” said the most sentimental of the ten fools, “we have lost him.” So saying he burst into tears, and the rest of the nine followed suit.

Seeing them weeping on the river bank, a sympathetic wayfarer enquired for the cause.  They related what had happened and said that even after counting themselves several times they could find no more that nine.  On hearing the story, but seeing all the ten before him, the wayfarer guessed what had happened.  In order to make them know for themselves that they were really ten, that all of them had come safe from the crossing, he told them, “Let each of you count for himself but one after the other serially, one, two, three and so on, while I shall give you each a blow so that all of you may be sure of having been included in the count, and included only once.  The tenth ‘missing’ man will then be found.”  Hearing this they rejoiced at the prospect of finding their ‘lost’ comrade and accepted the method suggested by the wayfarer.

While the kind wayfarer gave a blow to each of the ten in turn he that got the blow counted himself aloud.  “Ten,” said the last man as he got the last blow in his turn.  Bewildered they looked at one another,”We are ten,” they said with one voice and thanked the wayfarer for having removed their grief.

This is the parable. From where was the tenth man brought in?  Was he ever lost?  By knowing that he had been there all the while, did they learn anything new? The cause of their grief was not the real loss of any one of the ten, it was their own ignorance, rather their mere supposition that one of them was lost – (though they could not find out who he was) – because they counted only nine.

Such is the case with you.  Truly there is no cause for you to be miserable and unhappy.  Your yourself impose limitations on your true nature of infinite Being, and then weep that you are but a finite creature. Then you take up this or that sadhana [spiritual discipline] to transcend the non-existent limitations. But if your sadhana itself assumes the existence of the limitations, how can it help you to transcend them?

Hence I say, know that you are really the infinite, pure Being, the Self Absolute.  You are always that Self and nothing but that Self.  Therefore, you can never be really ignorant of the Self; your ignorance is merely a formal ignorance, like the ignorance of the ten fools about the ‘lost’ tenth man.  It is this ignorance that caused them grief.

Know then that true Knowledge does not create a new Being for you, it only removes your ‘ignorant ignorance.’ Bliss is not added to your nature, it is merely revealed as your true and natural State, Eternal and Imperishable. The only way to be rid of your grief is to Know and BE the Self.  How can this be unattainable?