Saadi Shirazi, the pen name of Abu-Muhammad Muslih al-Din bin Abdullah Shirazi, (1210-1291) was a major Persian poet of his period, and his verse, expressive of deep and subtle thought, is still admired and quoted.   Perhaps one reason for the insight he showed in his life and writing came from his long  years of travel through remote and troubled regions, which brought him into contact with people of every level.  After attaining an education in Baghdad, unrest and war sent him wandering for thirty years, through what is modern Turkey, Syria, Egypt, Arabia and the Persian gulf.  For seven years, he was held as a slave by Crusaders in Acre, and forced to dig trenches outside of the city.  Later, he returned to his native Shiraz, where his talent was recognised and celebrated, and he apparently lived the remainder of his life there.  His main works are the Bostan (Orchard) and the Gulistan (Rose Garden), which are major literary classics. 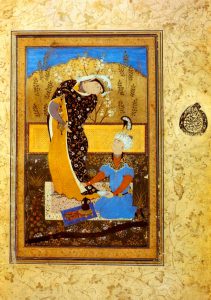 There is a story about Saadi, recounted by Hazrat Inayat Khan, that gives a fine example of Sufi chivalry.  Once, Saadi was deeply in love with a girl, valuing her more than all else in his life, and he would willingly sacrifice everything for her sake.  He visited her for some time, but then one day he came and to his deep dismay, found her in the arms of another man.  Withdrawing quietly, he went and stood by the gateway of her home, waiting.

In time, the other man departed, and seeing Saadi standing there, thought, “Surely now, he is filled with jealousy and he is waiting to kill me!”

But as Saadi saw the man approaching, he called the greeting of peace, “Salaam alaikum!  Friend, do not worry.  I am waiting to give you a word of good advice.  As I have seen, and gone away quietly, so do you also, if someday you see her in the arms of another.  That is the way in which the wise love.”