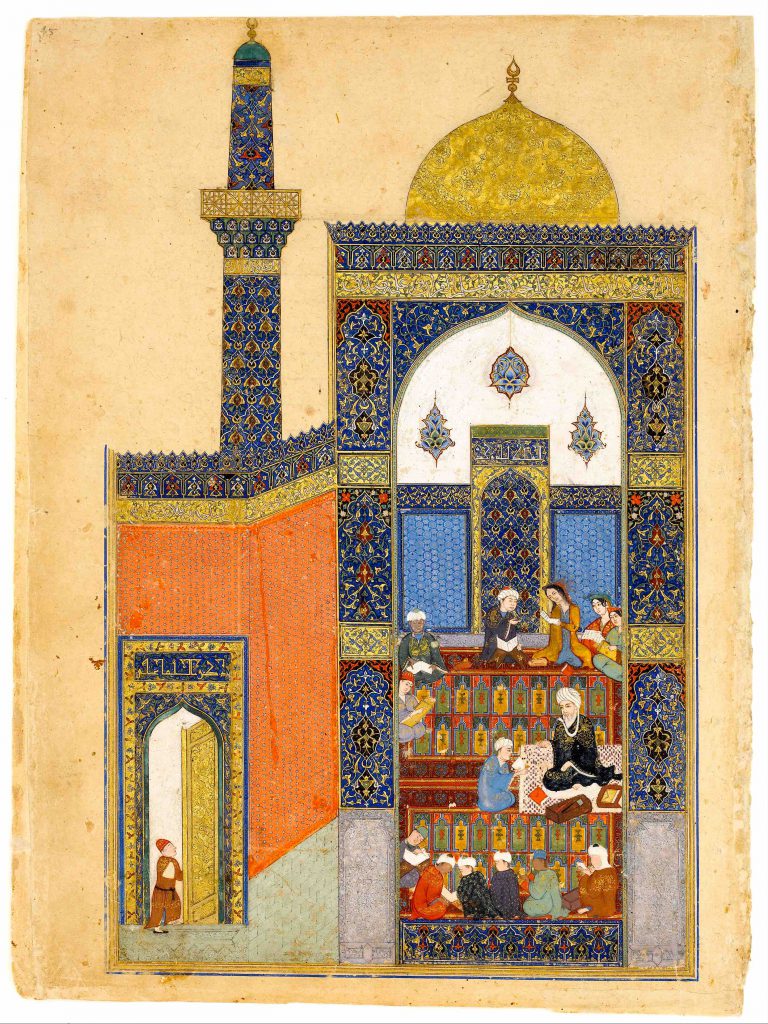 Leila and Majnun at school.

This legendary tale of two lovers doomed to eternal separation was first put into verse in the 5th c. CE by the Arab poet Qays Ibn al-Maluh, and then five hundred years later was adapted by the Persian poet Nizami Ganjavi.  Since then many other versions and elaborations have followed, among them by such notable figures as Amir Khusrow and Jami.  It is the story of a young man who falls in love with a maiden while they are still in school, and becomes so obsessed with his love for her that the world thinks he is crazy (the name ‘Majnun’ means mad or possessed). Consequently, her parents forbid her to have any contact with him, and his life is consumed by his unfulfilled longing.  As love turns both the earth and the heavens above, so over the centuries the Sufis have incorporated many episodes into the story to illustrate various aspects of the soul’s journey to the divine Beloved.  Here is the first part of Hazrat Inayat Khan’s retelling of the tale, and it is interesting to note the style in which he tells the story, incorporating lines of poetry.  In the east, where there is an immense body of poetry that is well-known, a well-crafted poem or story will characteristically include allusions to other poems and to passages of the Koran which the ordinary reader would immediately recognise.

The story of Leila and Majnun has been told in the East for thousands of years, and has always exerted a great fascination. For it is not only a love story, but a lesson in love; not love as it is generally understood by man, but the love that rises above the earth and heavens.

A lad called Majnun from childhood had shown love in his nature, revealing to the eye of the seers the tragedy of his life.

When Majnun was at school he became fond of Leila.  In time the spark grew into a flame, and Majnun did not feel at rest if Lelia was a little late in coming; with his book in his hand, he fixed his eyes on the entrance, which amused the scoffers and disturbed everybody there.

The flame in time rose into a blaze, and then Leila’s heart became kindled by Majnun’s love. Each looked at the other; she did not see anyone in the class but Majnun, nor did he see anyone save Leila.

In reading from a book Majnun would read the name of Leila; in writing dictation Leila would cover her slate with the name of Majnun.

All else disappears when the thought of the beloved occupies the mind of the lover.

Everyone in the school whispered to each other, pointing them out.  The teachers were worried and wrote to the parents of both that their children were crazy and intensely fond of one another, and that there seemed no way to divert their attention from their love affair, which had stopped every possibility of their progress in study.

Leila’s parents removed her at once, and kept a careful watch over her.  In this way they took her away from Majnun; but who could take Majnun away from her heart? She had no thought but of Majnun.

Without her, Majnun, in his heart’s unrest and grief, kept the whole school in a turmoil, until his parents were compelled to take him home, as there seemed to be nothing left for him in the school.

Majnun’s parents called physicians, soothsayers, healers, magicians, and poured money at their feet, asking for some remedy to take away from the heart of Majnun the thought of Leila.  But how could it be done?

Even Luqman, the great physician of the ancients, had no cure for the lovesick.

No one has ever healed a patient of love.  Friends came, relations came, well-wishers came, wise counsellors came; and all tried their best to efface from his mind the thought of Leila. But all was in vain.

Someone said to him, “O Majnun, why do you sorrow at the separation from Leila? She is not beautiful. I can show you a thousand fairer and more charming maidens, and can let you choose your mate from among them.” Majnun answered, “Oh, to see the beauty of Leila, the eyes of Majnun are needed.”