Hazrat Inayat Khan told the following account from the traditions of the Sufis.

There is a story told about a great Sufi in India, whose name was Usman Haruni. He was a murshid to whom came thousands of disciples, among them many of the most learned and philosophical people of the time.  He taught them the deepest truths of mysticism, and most of all to worship the nameless and formless God.

But there came a time when he said to them, “So far I have worshipped according to tradition*, but now I feel that I must go and prostrate myself before the image of the goddess Kali in all humility.” 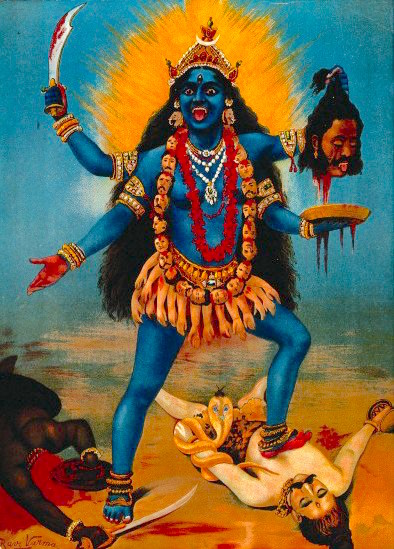 His pupils were aghast. That he, whose conception of God had been so lofty, should go and bow before the hideous image of Kali, to worship whom was to break the law of their religion, was beyond anything they could conceive, and caused them to fear that their master had lost his reason  Some even thought that he was treading the downward path.

So when the teacher went to the temple of Kali, only one of his pupils went with him, a youth whose devotion to his master was very great. As they went, the teacher said to the disciple, “You should go back. They are many, and are surely in the right; I am perhaps in the wrong.”

But the young man still followed. When the temple was reached, the teacher was so greatly moved by the thoughts that the image of the goddess suggested to hm that he prostrated himself in humility. And the disciple, standing by, looked on with sympathy at the thought of how many followers his master had had and of how in one moment all had turned from him.

When the teacher arose he said, “Do you still follow me?” And when the disciple said that he did, the holy man asked him further, “But perhaps you do not understand why you follow me?”

Then the youth said, “You  have taught me the first lesson of the spiritual path: that none exists save God. How then can I exclude this image of Kali if you choose to bow and prostrate yourself before it?”

*i.e. the Muslim tradition, which forbids images and their worship.  The student of Usman Haruni was Moinuddin, whom we now know as Khwajah Moinuddin Chishti, the great Sufi saint of Ajmer, sometimes called Sultan-i-Hind, or the spiritual ruler of India.

2 Replies to “Tales: Worshipping before Kali”