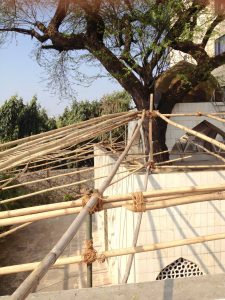 At the Dargah of Hazrat Inayat Khan, preparations are under way for Visalat Day, the anniversary on February 5th of the day he passed from this world.  The invitation cards have been printed and mailed, the catering menu has been set, tea-cups and carpets have been ordered, there is fresh paint and whitewash everywhere, bamboo scaffolding has been erected for the tent, and guests are starting to arrive from far away.

This is the 90th anniversary of the passing of Hazrat Inayat, and naturally the pilgrims have different feelings from those of the mureeds in 1927.  In the Sufi world, the passing on of a realised being is seen as a joyful return home; the soul is thought of as the bride going to the embrace of her Beloved, from which we have the word ‘Urs,’ meaning ‘wedding.’  After all the pains and limitations of life on earth, the spirit of the illuminated being completes its work and gains its freedom. Therefore we decorate the tomb with flowers, listen to inspiring music, and serve food to whoever comes, but it is easier to enjoy the ‘Wedding’ now that some time has passed; those who knew Hazrat Inayat in his lifetime would of course have suffered the shock of separation and grief.

A few pilgrims made a journey even on the first Visalat, in 1927.  The Norwegian mureed Shamcher Beorse said farewell to his Murshid at the end of the Summer School in Sureness in 1926, and went home to Oslo.  Then, unaccountably, in the middle of winter, without being able to explain why, he found himself again boarding a ferry and making the journey south to Suresnes.  When he arrived, he found a few others had also come, responding to some unidentified call.  Puzzled, they went to bed, and in the morning the news reached them that far away in India, Hazrat Inayat Khan had died, although he was not yet 45 years old.  In Shamcher’s words, “We looked at each other, and said, ‘Now it is up to us.'”

Hazrat Inayat devoted all his energies in the West to teaching Sufism and to spreading the Divine Message of love, harmony and beauty in the world, but he did not expect that mureeds would automatically want to help with the work of the Message.  He left that to each one, to their own inner feeling. But as the story of the first Visalat shows us, some mureeds do feel the call, and for them there is certainly a special blessing.