When offering the Sufi prayer Saum with movements, the very first gesture is that of hands raised on either side of the head, palms facing outward and flexed arms forming the shape of a receptacle or a vessel, while we say, ‘Praise be to Thee, Most Supreme God’. It is the opening of the prayer and thus a most sacred moment as we address ourselves to the Divine, endeavouring to be present with Him.

In antiquity and early Christianity, this gesture is called orant, from Latin orare, meaning to pray; thus ‘orant’ is the one who prays or addresses the Divine in supplication. This gesture is one of the most ancient movements of prayer. It is found in ancient Egypt, where the hieroglyph of raised arms 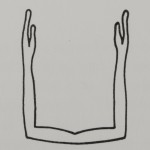 Hieroglyph of “Ka”, the spiritual double of a human being. From: Lurker, Manfred. The Gods and Symbols of Ancient Egypt. An illustrated dictionary Thames and Hudson, 1974, p.73-74.

signified Ka or the spiritual force of a human being, his vital double that departs after bodily death and continues his journey in the afterlife. This gesture of raised arm was considered a magical one, invoking protection from the evil forces and appealing for the intervention of the Divine.

There are many funerary stelae in ancient Egypt where the deceased, in the form of his Ka, is shown facing the divinity, asking for mercy and forgiveness. An example is the stela of a devotee of Thoth , the god of wisdom that was represented in Egypt in the form of a baboon. 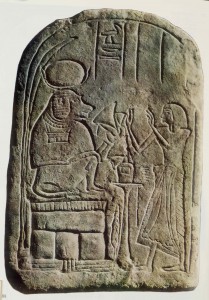 Here the deceased is standing in front of his god and with hands raised in prayer, is saying, as recorded in the upper register, ‘O Thoth, lord of Heaven.” On the head of the god there is a disc resting between horns–the moon, for Thoth is a lunar deity. As the moon reflects the light of the sun, so wisdom reflects the divine light. Horns obviously relate to the cow or bull. In Egypt Hathor, the goddess of Heaven, was portrayed as a sacred cow stretching from one end of the sky to the other, and the stars of the milky way were regarded as the outpouring of her bountiful udder. In ancient Crete and the near east, the heavenly king or the creator god was worshiped as a bull. Thus horns are a symbolic indication of heaven, of stretching upwards. The hieroglyph of Ka, of raised hands, reminds one of horns and in fact there was a phonetic resemblance between the Ka meaning the soul and Ka meaning the bull. Therefore this gesture of raised hands and the horns on the head of the god becomes a unifying motif of reaching upward.

In the first centuries of our era, Christianity spread rapidly in Egypt. In fact Egypt was Christianized before this religion was officially recognized by Rome. Naturally, ancient Egyptian imagery was adopted for Christian purposes. There are many early Christian funerary stones representing worshippers with raised hands praying to Christ for his mercy, in hope of resurrection. A Coptic stela now in Berlin depicts a group of deceased who are crossing the river of the afterlife.

They are travelling in a typical boat of the Nile, seen so often in ancient Egyptian funerary images, as it was believed that the soul must travel through the waters of the Netherworld following the path of the night voyage of the Sun god Ra. The prayerful raised hands and the smiles on the lips of these devotees give a sense of hope of reaching the other shore and finding salvation.

One of the most famous images of orant in early Christian art is found in the catacombs of Priscilla in Rome, also from the 3rd century. Christians believed in bodily resurrection, but land was scarce and therefore expensive outside the city walls. Therefore extensive underground tunnels were dug for Christian burials; the deceased were placed in carved-out niches, like shelves, lining the walls of the corridors. For wealthier families, rooms, called cubiculum, were excavated. There are not many images in these catacombs; if there are human figures, they are often depicted with this orant gesture, in expectation of resurrection. In the ‘Velatio’ cubiculum, there is a semicircular lunette over the arcosolium where the sarcophagus of the deceased was located, where this famous orant figure is painted. 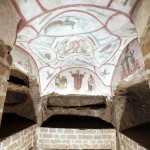 The fresco illustrates the life of a woman: first as a young lady who was brought to life by her father and given into the care of her husband, seen on the left side of the lunette; then on the right she is portrayed as a mother holding her child and raising a new generation. These are images of the fulfilled earthly life. In the middle she is standing with raised arms in the gesture of an orant and with veiled head praying to her Lord, asking Him to meet her on the other side and grant salvation. 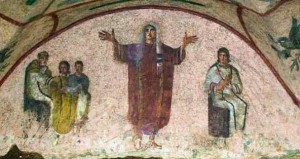 This veil resembles a Jewish prayer shawl, called a tallit, which is made of white fabric with blue stripes and tassels. In the Jewish tradition, in order to face the Lord one must cover the head with this veil. Since early Christianity was brought to the West by Jews and in the beginning was considered a Jewish sect and not a separate religion, Jewish customs were intermingled with the new Christian ideas.

The feeling one gets from visiting these catacombs, where thousands were buried over the centuries, and from closely observing such images as this triumphant orant, is not, strangely enough, gloom, depression, sorrow and the fear of death, but, on the contrary, a feeling of real joy, of victory over death, a total faith in meeting the Heavenly King with the hope of resurrection.

Byzantine art absorbed the ancient imagery inspired by the oriental tradition and this gesture is sometimes found in the apses of churches where the divine figure or a saint is shown praying for the whole congregation of the faithful, interceding for them before the heavenly king. Such is Saint Apollinaris in the apse of the church of Sant’Apollinare in Classe in Ravenna, dating from the 6th century. 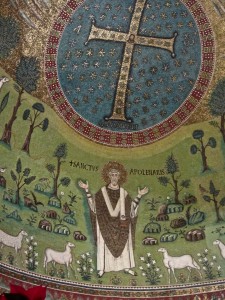 Apse decoration with of St.Apollinaris from Sant’Apollinare in Classe, Ravenna. 6th century mosaic. Photograph by the author.

The saint stands in a green pasture surrounded by lambs, symbolical of the devotees, beneath a large cross floating against the starry sky, which says “Salvus Mundi” or Savior of the World. The saint’s position between the heavenly sphere and the earthly abode and his orant gesture identifies his role as an intercessor, praying to God on the behalf of the faithful.

There is yet another ancient sacred image that became integrated in the Christian figure of orant. The gesture of raised hands can also be found in a slightly different context in the religious culture of ancient Crete. One of the most popular images in Minoan Crete is that of the Mother Goddess, often called the Snake Goddess since she holds snakes in her hands. 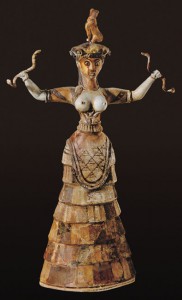 Faience statuette of a Snake Goddess, unearthed in the palace at Knossos, Crete, 1600 B.C. from: https://www.oneonta.edu/faculty/farberas/arth/Images/ARTH209images/minoan/snake_goddess.jpg

She stands erect with eyes wide open, as if in a trance and gazing into space where another reality is opened to her view. Her arms are raised and she holds snakes, symbols of the earth and energy emanating from her hands. She was worshiped most often in the form of a tree, and special rituals were performed in sacred groves. Thus she is associated with the Tree of Life, growing from the Earth and reaching up the Heavens, her feet becoming the roots, her wide skirt a trunk and her hands the branches reaching up to Heaven. She becomes the link joining humanity on earth with the Heavens. Later in Crete, when the island was conquered by mainland Greek tribes, this figure of the mother goddess transforms into the more familiar orant figure but shown in a more abstract way. 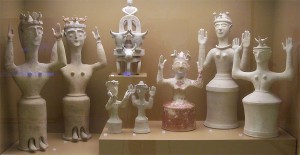 However the open palms, eyes lifted upwards, hieratic posture and the bird on her head gives the same meaning of raising upwards from the earth towards heaven and to face the Divine reality.

Many centuries later, that understanding of a female deity would become associated with the Mother of God. In the church of Hagia Sophia in Kiev built in the 11th century by the Byzantines as the first principal cathedral of the newly Christianized Rus, the figure of the Mother of God as orant is the largest and most visible image in the whole system of decoration of the cathedral. 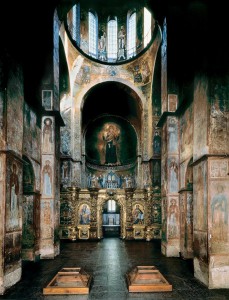 She is portrayed in the apse floating above the whole space of the cathedral, her body literally bending with the curve of the apse, so as to envelope with her blessed presence all the faithful standing below. She acts as an intercessor before the Christ portrayed in the dome. 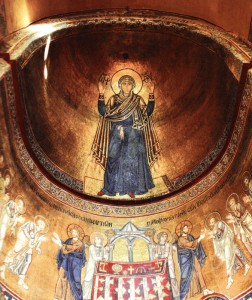 The Mother of God can be seen as a gigantic tree reaching up to the heavens and protecting the faithful with her raised arms representing the crown of the sacred tree.

Thus the gesture of orant is a very ancient movement of prayer and has various associations. From ancient Egypt comes an idea that this gesture meant the Divine or immortal aspect of the human being that continues to live after departure from the earthly plane. In ancient Crete this gesture was associated with the mother goddess, stretching like a tree from earth to heaven. From there came the development of the Christian orant, first in the faithful meeting the heavenly Father in the hope of salvation and then as the Mother of God acting as intercessor for the faithful before Christ. Really, by standing upright, raising our hands and reaching upwards, turning our palms outward and opening our chest, we are offering our energy and our heart to the Divine for His service. Our hands, usually busy with various activities, and our heart, occupied with many thoughts and feelings, are for an instant turned away from us and towards our Creator and His service. We are no longer there, only He is–and at that moment we become capable of attaining union with the object of our praise.

4 Replies to “The Orant Gesture”