The concept of wisdom is found in every tradition, but, unlike law, which draws clear lines between right and wrong, (no stealing, for example)  just what wisdom might be remains difficult to decide.  In one circumstance it might be wise to say a word; in another circumstance, it might be wise to remain silent. Indeed, in the Vadan we find this saying: The moment man realizes when to speak, and when to keep silence, he takes his first step in the path of wisdom.

In Vajrayana Buddhism, the figure of Manjushri is the epitome of wisdom; he is a fully enlightened Buddha who wields a flaming sword, and often is shown riding a lion.  Mastering the lion represents taming the mind, while the sword, we are told, represents transcendent wisdom by which ignorance and duality are cut down. The opposites of ignorance and duality are awareness and unity, so we can see that the work of wisdom is to bring light and to dispel the illusion of separation.  And we should not be misled by the military imagery, as the name ‘Manjushri’ means ‘noble and gentle.’ 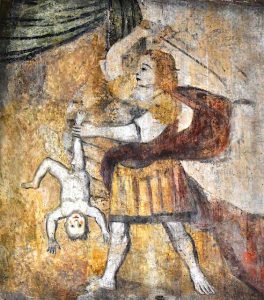 In the west, a name very often connected with wisdom is that of King Solomon, particularly in the story of the two women who came before him seeking judgment.  Both claimed to be the mother of the same little child, and they requested Solomon to decide who should be awarded custody.  The story does not tell us whether Solomon knew which woman was telling the truth and which was lying; it is possible that he recognised the true mother, but needed a way to prove the point. It is also possible that he did not know.  In any case, his solution was to call for a sword so that the child could be cut in two, and each woman could have half.

It is an alarming decree, particularly if we think that in those days a king, as the high judge of his kingdom, could decide whatever he wanted and there were no courts of appeal, no escape from the ruler’s whim.  But the menacing shadow of the sword cut through the duality of the situation, revealing the unity that had been concealed.  To save the life of the child the real mother renounced her claim, and by that act showed Solomon (and all those present) who was truly the mother of the baby.

By this we can understand that if wisdom sometimes needs a sharp edge to cut through confusion, it is not a sword that dismembers, but a keen and flashing light that opens the heart, for that is the seat of wisdom.  If we wish to be wise in this life, we must cultivate the heart, where the seed of wisdom was planted before we were born.  In the Gayan, Hazrat Inayat says,
I have not come to teach what you know not;
I have come to deepen in you that wisdom which is yours already.