The following text was written by Amina Ora Ray Baker Inayat-Khan, or ‘Begum Inayat Khan,’ (that is, ‘Lady Inayat Khan) and was published in London, in the first edition of the ‘Sufi’ Magazine in February, 1915.  The Begum was in her early twenties, and her first child, her daughter Noor, would have been a little more than a year old when she wrote this. 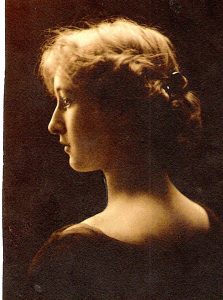 Motherhood itself is a mystical revelation. The Mother not only moulds the body and character of the the infant before birth, but she can even heal the hereditary infirmities by the power of her concentration. Each good and evil impression reflected upon the mind of the mother is stamped upon the mental and physical formation of the child. Therefore, besides her concentration on an ideal, an agreeable atmosphere and pleasant surroundings are most desirable. A secluded and solitary life is necessary, where a mother can escape undesirable impressions and the various temptations attracting her mind. The devotional and religious attitude which is  prescribed  by ancient religions is most needful.

The physical, intellectual, mental, moral and spiritual attributes of the child are all nurtured by the mother; therefore from a single being to the whole world, evolution is due to the mother.

The study of a child from its infancy until its full growth reveals the secret of the universe. The words of Rumi, wherein he describes the soul’s mystery in this mortal body and its longing for freedom, are truly illustrated by the infant’s life. Crying is the first conscious action of the infant. This crying without reason has a much greater meaning than most of us deem; it reveals the soul’s imprisonment in a physical body and the memory of the freedom it has just lost. This cry is often for the past, and seldom for the present need of food. The more the child grows and is interested in the mortal world, the more it forgets the past.

It is said that the infant smiles and speaks with the angels. This unveils the fact that the steadiness of its eyes and all its senses, with the mind pure from earthly impressions of good and evil, permit it to view the manifestations of the world unseen The steadfastness of the senses is beheld in its eyes, which it so seldom blinks.

Its tendency for sleep is due to ts being more in contact with the higher world. To its soul, the names and forms of earth are strange; therefore it finds relief in sleep. As Rumi says, “Every night thou freest our spirits from the body and its snares, making them pure as clean tablets.  Every night our souls are released from this cage and set free, neither commanding nor commanded over. At night the prisoner is unaware of his prison; at night the king is unconscious of his majesty. And there is no thought nor care for loss or gain.” The infant is soothed and put to sleep by the mother’s song, because it has originated from the planes of sound.

The magnetism of the child has many sources.  It depends upon the love and harmony of its parents, also upon the purity of its innocent mind and the reservation of its energies. The breath of the babe is more rhythmical and natural than that of an adult who sacrifices his energy in the abnormal activities of life, and thus spoils the natural rhythm of the breath. Mystics have learned many things by the study of an infant.

A most essential precaution which the oriental mother takes is the protection of the infant from ‘nazar’, the evil eye.*

This idea was respected also by the old Western peoples until modern civilisation arose, wherein all things beyond the grasp of the ordinary intellect have been discarded as mere superstitions. It is a scientific fact that a sensitive person is subject to the influences of others and becomes happy or sad without knowing the cause.

So it is with children, who naturally attract the entire attention of others and receive directly the conditions of disturbed and restless minds upon their own mirror-like minds, pure and uncontaminated by earthly troubles and trials. This most often causes unrest and illness among children; therefore it is a mother’s first duty to keep them under desirable influences and protect them mentally as much as physically.

Spiritual surroundings are the most essential factors in the creation of an ideal child.

*Nazar, an Urdu and Arabic word, strictly refers to the amulet worn as a protection against the influence of an unfriendly glance.

3 Replies to “Begum: A Mother’s Revelation”