Louis IX of France was a very devoted follower of his faith. He built many hospitals and homes for the needy, and he used to feed the poor from his own table, and wash their feet and care for them. In every way he endeavoured to live the teachings of his Saviour.  Now, he is venerated as a saint in the Catholic church. 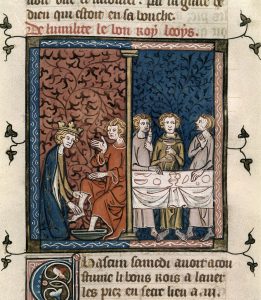 Miniature of St. Louis washing a poor man’s feet and feeding the poor. From the British Library.

Once Louis went on a pilgrimage, to visit holy sites throughout the world, and as befits the humble nature of a pilgrim he traveled with only a few companions and no outward display of his position.  Hearing of the great sanctity of Friar Giles, one of the first companions of St. Francis, and feeling a great desire to visit this holy man and greet him in person, Louis journeyed to Perugia, where Friar Giles was living.

When Louis arrived at the gate of the place where the Friars dwelled, he came as a poor traveler, and urgently asked the porter for Friar Giles, without giving any indication of who he was.  Accordingly, the porter went to Friar Giles and told him that a pilgrim was asking for him.  But Friar Giles, by inner vision, understood who it was that had come, and with great fervour came running from his cell, and embraced Louis, and although they had never met,  they knelt down together and kissed each other and held each other for a long time without saying a word.  Then, after a long time in perfect silence, they stood up, Friar Giles returned to his cell, and Louis prepared to resume his journey.

As the king was leaving, one of the friars asked one of Louis’ companions who the pilgrim was.  When they understood who the visitor had been, the friars began to talk among themselves, and, going to Friar Giles, rebuked him: “Here is the saintly Louis, a king, who came all the way from France to see you, perhaps to hear some spiritual discourse from you, and to receive some comfort for his spirit, and you did not say anything!  Is this the way to treat a guest? Surely, it is churlish.”

Friar Giles replied, “Beloved friars, don’t be surprised.  Neither was I able to say a word to him, nor he to me, for as soon as we embraced, the light of divine wisdom revealed his heart to me and my heart to him; and by the work of God we looked into each other’s hearts and knew directly all the things we wished to say to each other, better than if we had spoken. Because human speech is deficient, it cannot clearly speak the secret mysteries of God; in speaking, we should have rather been saddened than comforted.  Be sure, therefore, that the king departed deeply contented and comforted in his soul.”

Retold from The Little Flowers of St. Francis
Translated by W. Heywood

One Reply to “Friar Giles and Saint Louis”