When Inayat Khan, the Sufi teacher, came to America some ten years ago, I met him in San Francisco and wrote an account of our association for a Japanese daily paper of that city.

Inayat Khan succeeded in introducing Sufism into the Western World. Although he passed away several years ago, his books on Sufism as well as on other subjects have been well received in both America and Europe. The Sufi movement, therefore, still survives in the currents of thought to such an extent that it is now an important element in the world’s religion of the heart.

The other day I found a clipping of the article which I wrote, published in The Japanese American on May 11, 1923. Having been told by one of the disciples of Inayat Khan that certain Sufi friends in Europe are compiling a biography of their deceased leader, and that contributions of material are therefore desired, I am going to send the translation of this article to those Sufi friends… The following is the translation:

Zen is not confined to Buddhism. 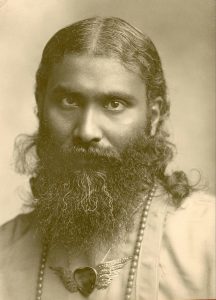 In Christianity there is an element of Zen. It also appears in Taoism and in Confucianism, however colored by those respective schools of thought.… “Sufism” encourages introspection among its students so as to realize Allah, or God, within one’s inner self. If the thoughts of St. Bernard and of Meister Eckhart can be called “Zen”, then the ideas of Jalal-uddin Rumi of Persia, as well as those of Kabir, the Indian poet, may also be called “Mohammedan Zen.”

Inayat Khan is known to his followers as “Pir-o-Murshid”, and they consider him to he the greatest teacher of this age. Since the latter part of March he has been at the Sufi Temple of this city [San Francisco], engaged in lectures and the personal guidance of his students.

Inayat Khan is now 41 years old. He is a man of commanding personality, being quite tall and stout, and wearing long hair and beard. His bright eyes lend an air of dignity to his dark-colored face. He is author of more than ten books, which range through such subjects as art, philosophy, and poetry. He is also a poet and a musician in addition to his other accomplishments, and he is now lecturing on Sufism under the auspices of Paul Elder, the book-dealer, while the intellectual groups of San Francisco crowd around him.

Mrs. Martin invited me to her home to meet her teacher, and as I had benefited very much by the use of her library over a period of several years, I did not hesitate in accepting her kind invitation. On my way there, I met Doctor Hayes, my old friend, the psychologist.

“Where are you going?” he asked.

“I am going to meet Inayat Khan,” I replied.

“Oh, that Sufi teacher?” said the doctor. “I attended his lecture this morning at the Sufi Temple. It was such a tiresome ceremony–the lighting of candles, much bowing, and all that. The lecture bristled with too much about God and Love. There was nothing new in it, and I had to pay one dollar for admission. I believe I will go along with you to meet him.”

“If you do not feel like going,” I replied, “you need not come with me. I am not asking you to do so.”

“Well,” he said, “they may not charge anything for an interview. I will come with you.”

Thus it was that the two of us went to the home of Mrs. Martin, the only Murshida in America. When we arrived we were ushered into the meditation room. It was dimly lighted by a lamp covered with green silk cloth, while fragrant Persian incense filled the atmosphere.

After Mrs. Martin introduced us, and after shaking hands in the American custom with the Murshid, we were seated at a square table, Mrs. Martin facing Dr. Hayes, and the teacher facing me.

My friend the psychologist began talking to the teacher by asking him how he liked America and its people, meanwhile selecting a cigar from his pocket, which, however, he hesitated to light at such a meeting.

Inayat Khan smiled at me and asked, “Mr. Senzaki, will you tell me what the significance of Zen is?

I remained silent for a little while, and then smiled at him. He smiled back at me. Our dialogue was over.

The psychologist, not having recognized what had happened, said, “You see, Mr. Khan, Zen is Japanized from Sanskrit. Its original meaning was Dhyana, which means meditation, and–“

At that point, Inayat Khan waved his right hand gracefully, and stopped the psychologist’s conversation.

Mrs. Martin then interposed, “I will get a book which describes Zen very well. It is an English translation from Japanese of The Twelve Sects of Buddhism. I will get it for you.”

Before she could rise from her seat, Inayat Khan again waved–this time with his left hand–gracefully stopping the Murshida, then he glanced at me.

His eyes were full of water–not the tears of the world, but water from The Great Ocean–calm and transparent. I recited an old Zen poem–not with my mouth–not in thought, but with a blink, like a flash. It reads:

No living soul comes near that water–
A vast sheet of water as blue as indigo.
The abyss has a depth of ten-thousand feet.
When all is quiet and calm at midnight,
Only the moonlight penetrates through the waves,
Reaching the bottom easily and freely.

“Mr. Senzaki, I see a Sufism in you,” he replied. Both of us then smiled at each other.

Mrs. Martin again interposed, “Mr. Senzaki, you should practice your English. Why don’t you talk more about Zen?”

At this both the Murshid and I laughed loudly, in which the Murshida and the psychologist both joined, without knowing why. The happy interview was over. I should have gone home at this time, but the psychologist seemed to wish to talk further with the Murshid and interpose his whys and becauses, while the Murshida, our Hebrew scholar, must show us her collection of books and documents. So we remained there the whole evening while we discussed Life, Death, Humanity, and the Universe.

*Nyogen Senzaki (1868-1956) was a Japanese Zen master and the student of Soyen Shaku.  In 1905, Soyen Shakyu was invited to the United States, and Nyogen Senzaki came with him, and lived there for the rest of his life, teaching Zen.  This is a portion of his recollection of his encounter with Hazrat Inayat Khan, originally included in “On Zen Meditation”, published in Japan in 1936.

5 Replies to “Sufism and Zen”