September 13th is Hejirat Day, the anniversary of the day on which Inayat and his brothers set sail from Bombay for the West, a date that symbolises the beginning of his work to spread the Sufi Message through the world.  The teachings were given in countless ways, most often in lectures that did not speak directly about the Message.  The following talk on the subject of the Message was given by Hazrat Inayat on June 30th, 1925. 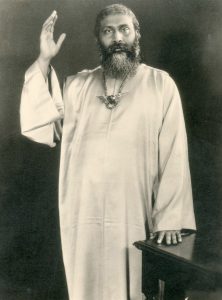 I would like to speak this evening on the subject of the Message. How is a mureed to regard the Sufi Message? There is a mureed who regards the Sufi Message as an esoteric school, where one can study and practise meditation and learn to understand something of the inner laws of nature, to obtain powers which are latent in man and to arrive at that inspiration which in the end culminates into a revelation. To this mureed all different esoteric schools are more or less the same. Perhaps the esoteric school of the Sufis appeals more to his nature, perhaps the contact which he feels with Murshid is deeper; and that is why he prefers to continue his spiritual journey through this school.

There is another mureed who looks upon it as an attempt among many other attempts to further brotherhood in the world. He recognises the need and importance of this and so he joins forces with the movement, though recognising that there are several other brotherhood movements besides this one, yet preferring to be in the Sufi Movement because his friends are in it. He is also friends with Murshid, and he feels tied to this brotherhood movement especially by friendship.

And there is another mureed who finds an ideal in the form of the Universal Worship, and who sees the beauty and the vastness of it. He sees in his inner realisation that religion is one. He adheres to this ideal and he feels sympathy with the work of making world-known the ideal of practising different forms of religion in one service, so that in the end the sections of humanity, which are now divided by their particular faiths, will be brought closer together, thereby keeping wars and disasters of all kind, which very often arises because of religious differences, from happening in the world.

For my mureeds therefore, it is best to wait and not to trouble about the meaning of the message, not to try to obtain an explanation of the message in words, until its meaning is revealed in their very heart which will enlighten them. Only, this has its own time. And when those who feel the meaning of the message make an attempt to explain it to another who does not yet understand it, this will be fatal. Words will never explain it; words will spoil it. The proof of truth is that truth springs up by itself in the heart of a person and so it is with the true message. Instead of being spoken of it in words, it must speak in the heart of those who follow it.

In India and Persia there is a special name of God and this is Khuda, which means self-revealing. The different qualities of God are not different from the qualities of man, the only difference is that in God they are present in perfection. This quality of self-revealing is beyond all other qualities. Truth is something which reveals itself; only it has its own time with every person. When the spiritual message is pleaded, is defended by someone, then it is a human message. It can only be spiritual when the soul itself begins to plead, when the spirit itself begins to defend. Then no man can deny it.

In a sincere follower of the message there arises a question: “Why does not everyone feel it, recognise it, like I do?” The answer is that you need not wonder about this. Your wondering will only make your faith feeble. No matter if the whole of humanity does recognise the message; if you alone recognise it, it is sufficient for yourself. If you depend upon the recognition by another, then your faith is wobbly. Nevertheless, the message apart, everything that is real, sincere, earnest, is a living thing, whether one recognises it or not. One’s soul certainly feels, knows it. The mind may stand as a barrier, yet the soul cannot refuse it, cannot deny it; for the innermost of every person is the Being of God and there truth is recognised.

There is no reason for us to be discouraged, however slow the message spreads in the world, for all things that are stable will spread slowly. For us there is only one thing to think of and that is that the truth is victorious, that the truth will never fail. Human efforts are limited, human means are limited, and thus our power and wisdom may be limited, but not the truth. And when the flow of truth comes, trying to rise from within and spread all around, it comes from the unlimited source and it must culminate into that fulfilment for which it is destined. What we require in our spiritual pursuit is to work patiently with firm faith and belief.

3 Replies to “Hazrat Inayat: The Message”