Among those who live in the northern parts of the world, it is a belief (usually asserted as a fact), that despite the uncountably large number of snowflak

es that fall each year, no two of them are the same.  How this was determined is never mentioned, but perhaps it is the result of some studious scientist shivering in a cold laboratory until their patience was exhausted, never finding two identical flakes.  It is certainly true that the variety is astonishing.  That the Divine Hand can casually throw down so many distinct forms should make us pause when we are tempted to feel proud of our unique ‘identity.’  The population of the earth is now about seven billion; one enthusiast estimated that a single snowstorm might send down thirty thousand times as many snowflakes.

In a number of his lectures, Hazrat Inayat Khan uses the metaphor of snow and water to illustrate aspects of spiritual wisdom.  Speaking of the inner life, he says:
The condition of man’s heart depends on its reflection of this Divine Light, as the condition of the sea depends on its reflection of the Cosmic Light. […] And as the sea responds to the cosmos more than the land, so the heart 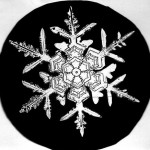 of the mystic responds to the Divine Light more than the heart of the average man. His heart is liquid, and that of the average man is frozen snow. Where does this freezing come from, since snow is also water? It comes from the thought of “I”, “my father, my mother, my beloved, my friend, mine, and separate from yours.” Whereas the first lesson of the mystic is, “Thou art, and not I.”

In daily life we are certainly aware that some people are more warm hearted than others, but it is only the heart that has been completely melted that can show this liquid, living quality to perfection.  Like physical water, the water of the heart flows freely, washing all that it touches, giving life, and fully embracing all who come within its reach.  And as it is the thought of self that freezes the heart, so it is love that melts it.  Love for another person can begin the process, but it is love for the divine that completes the melting, for that is the only fire with enough heat to melt away all the cold, hard ‘I.’

Then the question is, how to encourage that fire?  One important step for the seeker is to study life carefully, and recognise the infinite beauty that surrounds us and the abundant blessings we are granted.  If we could be truly conscious of all that we receive, even the most stony hearted would have cheeks wet with tears.  And if we sincerely want to build a strong fire, the other step is to shovel some of the snow out of the fireplace; in other words, to watch how often we put ourselves first, in our speech, actions and attitudes, and try to counterbalance the tendency by thinking of others first.

One Reply to “Snow and water”