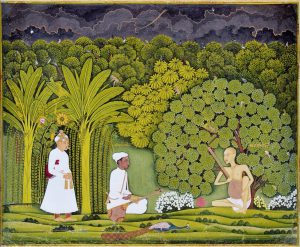 There is a story of Tansen, the great musician at the court of Akbar. The Emperor asked him, ‘Tell me, O great musician, who was your teacher?’ He replied, ‘Your Majesty, my teacher is a very great musician, but more that that; I cannot call him “musician”, I must call him “music”’. The Emperor asked, ‘Can I hear him sing?’ Tansen answered, ‘Perhaps, I may try. But you cannot think of calling him here to the court’. The Emperor said, ‘Can I go to where he is?’ The musician said, ‘His pride may revolt even there, thinking that he is to sing before a king’. Akbar said, ‘Shall I go as your servant?’ Tansen answered, ‘Yes, there is hope then’. So both of them went up into the Himalayas, into the high mountains, where the sage had his temple of music in a cave, living with nature, in tune with the Infinite. When they arrived, the musician was on horseback, and Akbar walking. The sage saw that the Emperor had humbled himself to come to hear his music, and he was willing to sing for him; and when he felt in the mood for singing, he sang. And his singing was great; it was a psychic phenomenon and nothing else. It seemed as if all the trees and plants of the forest were vibrating; it was a song of the universe. The deep impression made upon Akbar and Tansen was more than they could stand; they went into a state of trance, of rest, of peace. And while they were in that state, the Master left the cave. When they opened their eyes he was not there. The Emperor said, ‘O, what a strange phenomenon! But where has the Master gone?’ Tansen said, ‘You will never see him in this cave again, for once a man has got a taste of this, he will pursue it, even if it costs him his life. It is greater that anything in life.’

When they were home again the Emperor asked the musician one day, ‘Tell me what raga, what mode did your master sing?’ Tansen told him the name of the raga, and sang it for him, but the Emperor was not content, saying, ‘Yes, it is the same music, but it is not the same spirit. Why is this?’ The musician replied, ‘The reason is this, that while I sing before you, the Emperor of this country, my Master sings before God; that is the difference.’