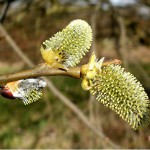 one Holy Book, the sacred manuscript of nature, the only scripture which can enlighten the reader. ‘ Hazrat Inayat was careful to explain that this does not mean that, for a Sufi, the sacred books of great religions are not inspiring or that they do not deserve reverence—quite the contrary, but that all sacred literature, including the many mystical poems that have given life to the spirit of the world have themselves been inspired by the mystery, the beauty and the divine voice of nature.

In the northern part of the world this time of year gives a very special feeling.  It is Spring, and after enduring the dark, cold, relentless and seemingly endless winter, one day without warning there is more light, the touch of the air is no longer menacing, the earth warms to the smile of the sun, and there are signs of life everywhere.  Tiny millimetres of green begin to creep through the dead brown remains of last year’s growth, and the birds are suddenly bustling about with twigs, making nests to serve the unstoppable urge to raise a new brood.

It is not surprising that this time of year is celebrated by many religious traditions.  (If birds wrote sacred books as we do, perhaps they would use the symbolic imagery of nests—but it seems they are too busy, or perhaps too sensible, for that.)  There is of course the Christian observation of the resurrection of Jesus, which communicates a message of hope and the renewal of life.  In many parts of the world, the holy days of Easter are linked with eggs, in some traditions dyed red as a sign of life, and this is also a symbol of regeneration. The Christian event is historically connected with the Jewish festival of Passover, which, as a celebration of liberation from the Egyptian captivity, speaks to the spirit of hope and renewal.  The ancient Persian festival of Nowruz, said to have been initiated by Zarathustra some three or four thousand years ago, comes at the time of the Spring equinox, and is considered to mark the New Year; it is still observed with flowers, dishes including sprouted wheat and ceremonial fires, in Iran and in other countries.

The cycle of renewal has been portrayed in a number of ways in the mythological tapestries of the world.  In ancient Egypt, Osiris, as the god of fertility, was killed and dismembered, but re-assembled and brought back to life by the persevering love of his sister Isis.  There is an interesting lesson in the figure of Osiris, for he was not only the god of fertility, but also the god of the after-life.  Perhaps, in this connection, the teaching is that life does not die, it is death which dies, and the spirit will encounter the fertile strength of Osiris even after the body fails.  Osiris, by the way, was depicted with green skin, and it is possible there is a connection with the mysterious figure of Kidhr mentioned in the story of Ibrahim bin Adham posted recently.  What is more, Osiris is not the only god to have been killed and restored; Dionysus, the Greek god of fertility and the vine, was also killed, as an infant, and then restored.  Indeed, there was a strong interest in the 19th century in the mythological parallels between the death and rebirth of Dionysus and Christ.

When we feel the sap of life beginning to rise, it fills us with joy and we are very close to the Divine Presence.  Hazrat Inayat expressed it this way:  This blessing is revealed in every aspect of life, even in [apparently] inanimate objects such as trees and plants; even there we see in the spring the rising of life. Flowers and plants are but different expressions of the one life, the source of all harmony, beauty, and joy. Someone asked the Prophet for a definition of the soul, and he answered in one sentence, ‘The soul is an action of God.’ Nothing could be more expressive. Thus joy is the action of the inner or divine life, and when it shows itself in any form it is the reaction to the action of God.