Extracted from ‘Memories of a Sufi Sage’*

In the autumn of 1924, after the Summer School, I had accompanied Murshid to Rome where, one morning during our stay, we heard that Pontifical High Mass, officiated over by the Pope himself, was to be celebrated in St. Peter’s the next day. This is a special Mass held only once every year, and Murshid asked me to try to get tickets for the occasion.  I did try; but after many fruitless efforts was obliged to return to the hotel with the news that tickets had been sold out months before.

Murshid did not appear to be as cast down as I by this information; and the following morning, about half an hour before the Mass was due to begin, he asked me to order a carriage. 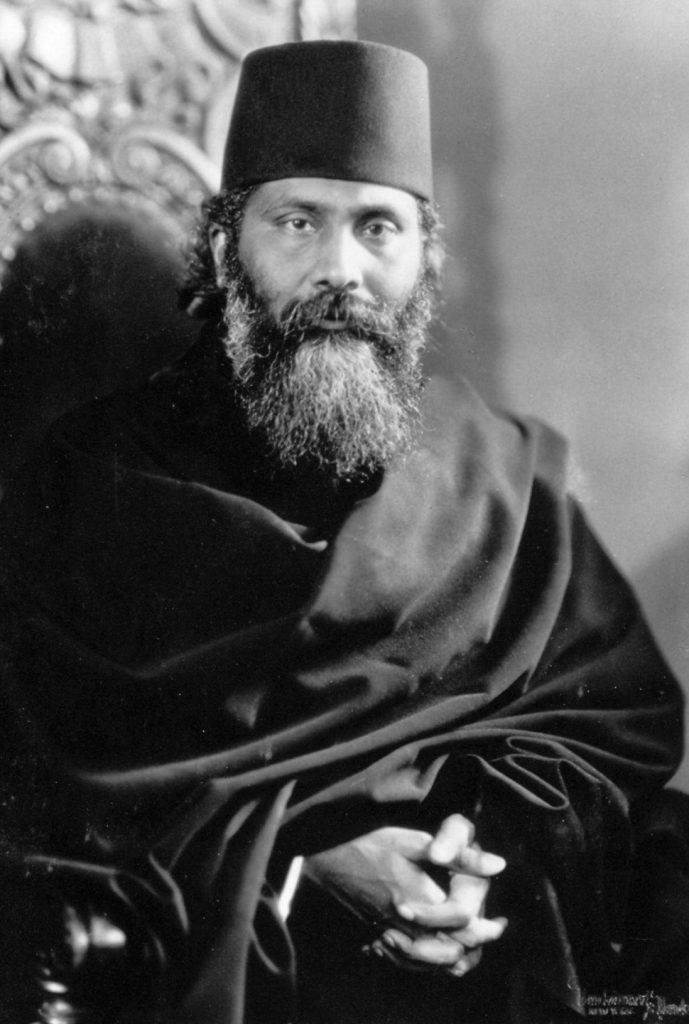 “It will be impossible for us to get in to the High Mass!” I exclaimed, but Murshid simply repeated his request: “Please order a carriage.”

I did so, and we set out for the great Piazza in front of St. Peter’s; Murshid dressed in his usual, simple black cassock. When we arrived, the Square was full of activity and a sense of anticipation. A row of the famous Swiss Guards in their theatrical blue and orange uniforms stood at the foot of the wide steps leading up to the Cathedral.  Their job was to turn away anybody arriving without the big white card necessary for admittance.

“You see,” I said to Murshid, “Absolutely impossible to get in.”

Nevertheless, he stepped out of the carriage, and asked me to pay off the driver. Slowly he walked towards the morning-coated dignitary checking the cards at the foot of the steps. The latter, the epitome of lordly officialdom, duly asked in Italian for his card. Murshid looked at him, smiling, and firmly, with the utmost courtesy, replied, “It is quite all right.”

Although he spoke in English, his tone was irresistible. The man moved back, overcome by the presence of this majestic stranger, and let Murshid through. I quickly slipped in behind him, as a sort of shadow; but whereas I had a tremendous desire to hurry up the steps before being ignominiously called back again, Murshid ascended in a completely unruffled, stately manner.

At the head of the steps stood another row of Swiss Guards, and in their midst an even more impressive personage than before, in what appeared to be full evening dress. Again, Murshid was asked for his card; and again, with exactly the same air of courteous authority, he smiled and replied, “It is all right,” moving quietly on as he did so.  The official, like his counterpart at the foot of the steps, was obviously much awed by Murshid, by his serene appearance and the tone of his voice, and he too, to my utter astonishment, stepped back.  We were through.

As we entered the radiant gold and white interior of that marvellous building – the largest basilica in all Christendom – the choir began to sing in what I can only describe as a heavenly manner, the sound echoing against dome and arches with unearthly beauty. At that moment the Pope was borne in on a golden throne carried on the shoulders of twelve priests. The High Mass had begun.

As the intoning of the Pope, the chanting of the choir and the movement of priests and censers became interwoven in that great festival of worship, the whole atmosphere  became charged in the most wonderful way; charged with something mystical and incredibly beautiful. Light streamed through the golden aureole in the little window above the High Altar; gleamed on the marble floor; flickered over the eighty-nine candles which burn day and night round the tomb of St. Peter.

Murshid was going more and more deeply into a state of ecstasy. Rapt and still, he seemed in another world. And then suddenly, as if the words had been wrung from him, he cried, “How wonderful is the power of the living Christ!”

I heard him with astonishment, realising I had never properly understood him before. Having often listened to his explanation of how the old religions on earth were gradually going to become united in some greater, common belief – rather as the ancient Egyptian and Greek religions had been gradually superseded by the Islamic and Christian faiths – I had taken this to mean that all forms of worship existing in the present century were already, virtually, finished. Now Murshid’s words at the culmination of the great service showed me how wrong I had been. The Christian religion was still, after all, a tremendous channel for the outpouring on earth of Divine Power.

But in speaking of  ‘the living Christ,’ Murshid had referred, not to Jesus, who was one of the great Masters of the Wisdom, but to that ever-living Spirit of Power and Light which operates through all Masters down the ages.

The words gave me a new insight into the oft-quoted assurance of Jesus, “I have come not to destroy but to fulfil the Law.” I remembered, too, how Buddha had said that he had not come to destroy Hinduism, but rather to reform and purify it of the dogmas and superstitions which had become attached to it. This, then, was the work of all great spiritual Messengers; to build on the foundations of a previous Message which, through the misinterpretation and limitations of humankind, had become, one might say, worn down; had lost much of its original purity and power.

I walked out of St. Peter’s wth a completely new understanding, and the words echoed long in my head:
“How wonderful is the power of the living Christ!”

*Memories of a Sufi Sage – Hazrat Inayat Khan’ by Sirkar van Stolk and Daphne Dunlop.  Sirkar van Stolk (1894 – 1963) worked closely with Hazrat Inayat Khan for several years, helping him as a secretary and travelling companion. He subsequently devoted his life to the work of the Message in the Netherlands and later in South Africa.  This memoir was completed from his notes after his death by Daphne Dunlop.

One Reply to “Glimpses: ‘…the Power of the Living Christ’”