Hazrat Inayat Khan refers in this talk to the story of Krishna and the Gopis.  Briefly, Krishna was raised in a rural community where herds of cows were kept–hence the opportunity of the young child to develop a taste for butter.  When he grew into a handsome youth, all the gopis, the maidens who looked after the cows, were in love with him, and longed to dance with him at a certain festival.  Krishna promised each gopi that he would dance with her, and when the festival came, each maiden had the experience that he danced with her and her alone.

The life of Krishna is an ideal which gives the picture of the life of a perfect man. The real meaning of the word Krishna is God, and the man who was identified with that name was the God-conscious one who fulfilled his message in the period he was destined to give it. 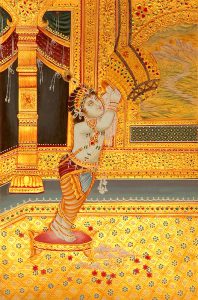 The story of Krishna, apart from its historical value and interest, is of great importance to the seeker after truth. Nothing is known of the father and mother of Krishna. Some say he was of royal birth; it means of kingly origin, from that King Who is the King of all. Then he was given in the care of Yashoda, who brought him up as his guardian-mother. This is symbolical that the earthly parents are only the guardians, the real father and mother being God. It is said that in his childhood Krishna was fond of butter and he learned as a child to steal butter from everywhere. And the meaning is that wisdom is the butter of the whole life. When life is churned through the wheel, then out of that comes butter; wisdom is gained from it. Krishna was stealing it, which means wherever he found wisdom he learned it; thus he benefited from everybody’s experience.

Plainly speaking, there are two ways of learning wisdom. The one way of learning wisdom is that a person goes and drinks to excess, and then falls down in the mud, and then the police take him to the police station, and when he recovers from his drunkenness he cannot find his clothes and he is horrified at his own appearance. This makes him realize what he has done. This is one way of learning, and it is possible that he does not learn. The other way of learning is that the young man goes in the street, and he sees a drunken man and sees how terrible it is to be in this position – and he learns from that. That is stealing the butter.

But then the latter part of Krishna’s life has two very important aspects. One aspect teaches us that life is a continual battle and the earth is the battlefield where every soul has to struggle, and the one who wants to own the kingdom of the earth must know very well the law of warfare. The secret of the offence, the mystery of defense, how to hold one’s position, how to retreat, how to advance, how to change position, how to protect and control all that has been won, how to let go what must be given up, the manner of sending an ultimatum, the way of making an armistice, the way by which peace is made – all this is to be learned in this life’s battle.  Man’s position is most difficult for he has to fight on two fronts at the same time; one enemy is himself and the other is before him. If he is successful on one front and fails on the other front, then his success is not complete.

And the battle of each individual has a different character. The battle depends upon man’s particular grade of evolution. Therefore every person’s battle in life is different, of a peculiar character. And no person in the world is free from that battle; it is only that one is more prepared for it, the other perhaps is ignorant of the law of warfare. And in the success of this battle there is the fulfillment of life. The Bhagavad-Gita, the Song Celestial, from beginning to end is a teaching on the law of life’s warfare.

The other aspect of Krishna’s life is that every soul is striving to attain God, but God not as a Judge or a King  but as a Beloved.  Every soul seeks God, the God of Love in the form it is capable of imagining, and thus the story of Krishna and the Gopis signifies God and the various souls seeking perfection. 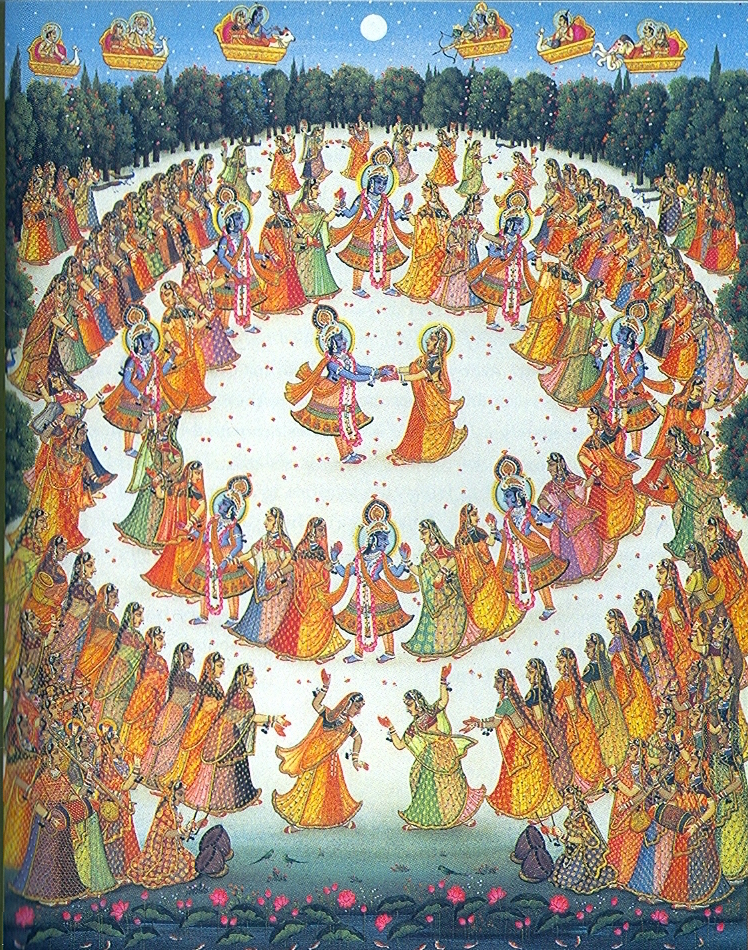 The life and teaching of Krishna has helped the people of India very much in broadening the thought of the pious. The religious person, full of dogmas, is often apt to make dogmas too rigid and expects the godly or the God-conscious to fit in with the standard of goodness. If they do not fit in with his particular idea of piety he is ready to criticize them. But the thought and life of Krishna was used by the artist and the poet ant the musician, and out of it was made a new religion, a religion of recognizing the divine in natural human life, and that idea of considering a spiritual person as someone exclusive, remote, stone-like and lifeless ceased to exist. The people of India became much more tolerant toward all the different aspects of life, looking at the whole life at the same time as an immanence of God.