Followers of the Way, […] what I want myself to impress on you is that you mustn’t be led astray by others. If you want to use this thing, then use it and have no doubts or hesitations! 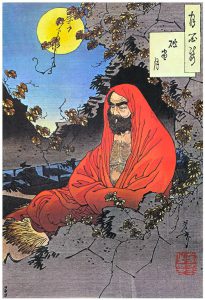 Bodhidharma in a late 19th c. woodblock by Yoshtoshi.

When students today fail to make progress, where’s the fault? The fault lies in the fact that they don’t have faith in themselves! If you don’t have faith in yourself, then you’ll be forever in a hurry trying to keep up with everything around you, you’ll be twisted and turned by whatever environment you’re in and you can never move freely. But if you can just stop this mind that goes rushing around moment by moment looking for something, then you’ll be no different from the patriarchs and buddhas. Do you want to get to know the patriarchs and buddhas? They’re none other than you, the people standing in front of me listening to this lecture on the Dharma! Students don’t have enough faith in themselves, and so they rush around looking for something outside themselves. But even if they get something, all it will be is words and phrases, pretty appearances. They’ll never get at the living thought of the patriarchs!

Make no mistake, you followers of Ch’an. If you don’t find it in this life, then for a thousand kalpas** you’ll be born again and again in the three-fold world, you’ll be lured off by what you think are favorable environments and be born in the belly of a donkey or a cow!

Followers of the Way, as I look at it, we’re no different from Shakyamuni. In all our various activities each day, is there anything we lack? The wonderful light of the six faculties has never for a moment ceased to shine. If you could just look at it this way, then you’d be the kind of person who has nothing to do for the rest of his life.

Fellow believers, ‘There is no safety in the threefold world; it is like a burning house.’ This is no place for you to linger long! The deadly demon of impermanence will be on you in an instant, regardless of whether you’re rich or poor, old or young.

* Lin-Chi was a Chinese master of the Chan Buddhist tradition (d. ca. 866 CE).  Chan Buddhism (which subsequently developed into Zen Buddhism in Japan)  is said to have been brought to China by the monk Bodhidharma, perhaps from India or from Persia, in the late 5th century.  It offered a teaching ‘that does not rest on words or letters but is a special transmission outside of the scriptures,’ wherein the mind grasps the suchness of Reality.  Lin-Chi was iconoclastic in his methods, sometimes shouting at his students and striking them to help them drop their dogmatic attachment to scriptures and conventions.  He even went so far as to advise students, if they should meet him, ‘to kill the Buddha.’

**An immense period of time, the length of a single cycle of the cosmos (or ‘day of Brahma’ in the Hindu tradition) from creation to dissolution.

2 Replies to “Lin-Chi: The Buddhas are none other than you”