When the divinely inspired breath of Sufism began to blow across Persia a thousand years ago, it became perfumed, so to speak, by the intoxicating spice of poetry.  The astonishing, heart-opening verse of Mevlana Jelaluddin Rumi  is known now all over the world, at least in reincarnated translations in which the spirit of the poet still seems to glint and gleam, despite the loss of the musical language of the original.  Less well known, but fundamentally important to the development of Persian Sufi literature, is the poetry of Hakim Sani Ghasnavi (d. ca. 1131). 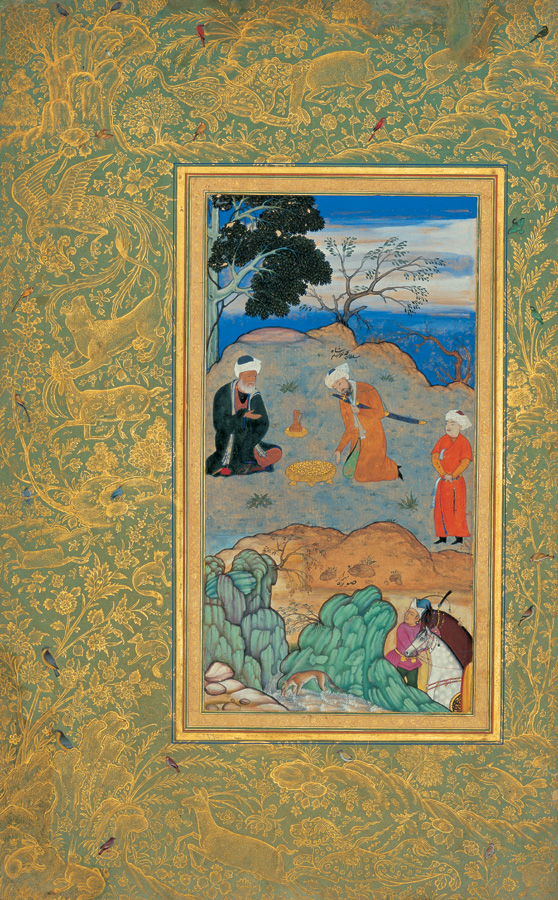 As a young man, Hakim Sanai was a gifted poet, and by his talents had earned him a place as the Court Poet of Ibrahim Bahram-Shah, the Sultan of Ghazni (in what is now Afghanistan).  He was, apparently, running smoothly on a career track to worldly greatness until destiny, or one could say, the Spirit of Guidance, intervened and sent him in a different direction.  The Sultan had decided to invade neighbouring India, and Hakim Sanai was ordered to accompany the Sultan on the expedition, so as to be able to properly record the anticipated great deeds of valour in his poems.

Hurrying to the court to comply with the order, Hakim happened to pass by a walled garden, and heard voices coming from within.  A group of revellers–some say drunks and some say dervishes, and perhaps it was both–were enjoying themselves in the garden, and as Hakim passed by he heard singing.  The young man paused to listen, and then one in particular, a notorious drunk called Lai Khur (‘ox-eater’), called to the Saki or cupbearer to fill his bowl, and proposed a toast to the blindness of the Sultan.  The Saki protested that this was not a fitting toast, but Lai Khur said that it was blindness indeed to leave such a fine city as Ghazni, where the Sultan’s care  and attention were needed, and march on a difficult and uncertain expedition to India.  Then, like a thunderbolt, the same voice proposed a toast to the blindness of the poet Sanai, who despite his intelligence and insight, wasted his talents on the ego of the Sultan.  He does not know what he has been created for, said Lai Khur; when he is called before his Maker, he will have nothing to show but verses praising a mere mortal like himself!

The words changed the life of Hakim Sanai completely.  He straightway withdrew from court life, even, we are told, declining the offer of marriage to the sister of the Sultan, and sought the guidance of a Sufi master named Yusef Hamdani.  After a pilgrimage to Mecca, he brought forth his best-known work, The Walled Garden of Truth.  The title has a double sense, since ‘walled garden’ in Persian can refer to paradise, but it also suggests the garden from which the voice of Guidance spoke to him on that fateful day. Not surprisingly, much of his Sufi poetry urges the reader to let go of the rags of illusion and awaken to the Divine Reality.

Break free
from your chains you have forged about yourself;
for you will be free when you are free of clay.
The body is dark – the heart is shining bright;
the body is mere compost – the heart a blooming garden.

He doesn’t know his own self:
how should he know the self of another?
He knows only his hands and feet,
how should he know about God?
This is beyond the sage’s grasp:
you must be a fool
if you think that you know it.
When you can expound on this,
you will know the pure essence of faith;
till then,
what have faith and you in common?
It is better to be silent
then to talk nonsense
like one of the learned;
faith is not woven
into every garment.

One Reply to “The Voice from Beyond the Wall”